Not for the first time during his run as a Sky Sports pundit, Roy Keane looked like he might combust.

Manchester City had raced into a 3-0 lead against Chelsea at Stamford Bridge, piling more pressure on under-fire boss Frank Lampard, but Keane had an expensively assembled attack in his crosshairs.

"The attacking players need to show up," he said of a line-up boasting big money close-season arrivals Hakim Ziyech and Timo Werner. Kai Havertz could only make the bench.

"We spoke before the game, we said they have a lot of quality, but to me they don't look like they're up to it. What do Chelsea need?

"They need a miracle to get back into this game. They've been shocking, particularly the attacking players."

Alongside him, former Liverpool great Graeme Souness had an issue with Ziyech's tracking back – or lack thereof – on Kevin De Bruyne's goal.

"Just watch Ziyech, he takes the free-kick, he wanders in and watch him. Big players don’t act like that," he said. "Sprint back as fast as you possibly can, you don't stand and watch the game like this.

"I'm sure when Frank sees that, he'll point out to Ziyech that you cannot do that in our football."

When Lampard was sacked a little over three weeks later, his uncle Harry Redknapp was similarly and more bluntly parochial about the biggest story in "our football".

"The two German players have been massive disappointments, massive. I'm not even sure Timo Werner is cut out for Premier League football, the physical side is too much for him."

Perhaps it is a function of the frequent changes in Chelsea's dugout that narratives around goodies and baddies are so hastily constructed. Remember Cesc Fabregas, Diego Costa and Eden Hazard as the "three rats" after Jose Mourinho's 2015 demise?

In that context, the role Ziyech and the two Germans played in Thomas Tuchel's Blues comprehensively downing Atletico Madrid gave a stark demonstration how much Werner and Havertz's compatriot has entirely changed the mood and trajectory of this talented team.

It said much of Havertz's woes since joining from Bayer Leverkusen for an initial £72million ($128M AUD) that Redknapp didn't actually use his name when he was the focus of his opprobrium.

One Premier League goal set against 12 in his final Bundesliga campaign suggests there is still plenty of ground to make up, but in a couple of blurring seconds, Havertz showed exactly what made him one of the most sought-after talents in Europe.

He was alert to move in front of Kieran Trippier and bring the ball under his spell. In that instant, Atleti were on the receiving end of the sort of lethal counter-attack that has become their Champions League calling card.

Then it was time to marvel at the pace, power and poise as he approached halfway before shovelling possession into Werner's path.

Under Tuchel, Havertz's shots per 90 minutes are up 2.3 from 1.4. The goals will surely come, but for now he had played his supporting role to perfection.

However much Havertz will be keen to hit the back of the net, his desire must pale next to Werner's.

The former RB Leipzig star was simmering with intent from early on against Atleti, bustling in behind their defence early on.

That famous pace was put to its best use when he galloped onto Havertz's 34th-minute pass. Head up and on high alert, Werner assessed the scene, took a touch with the outside of his right foot and then lined up a low cross with his left. 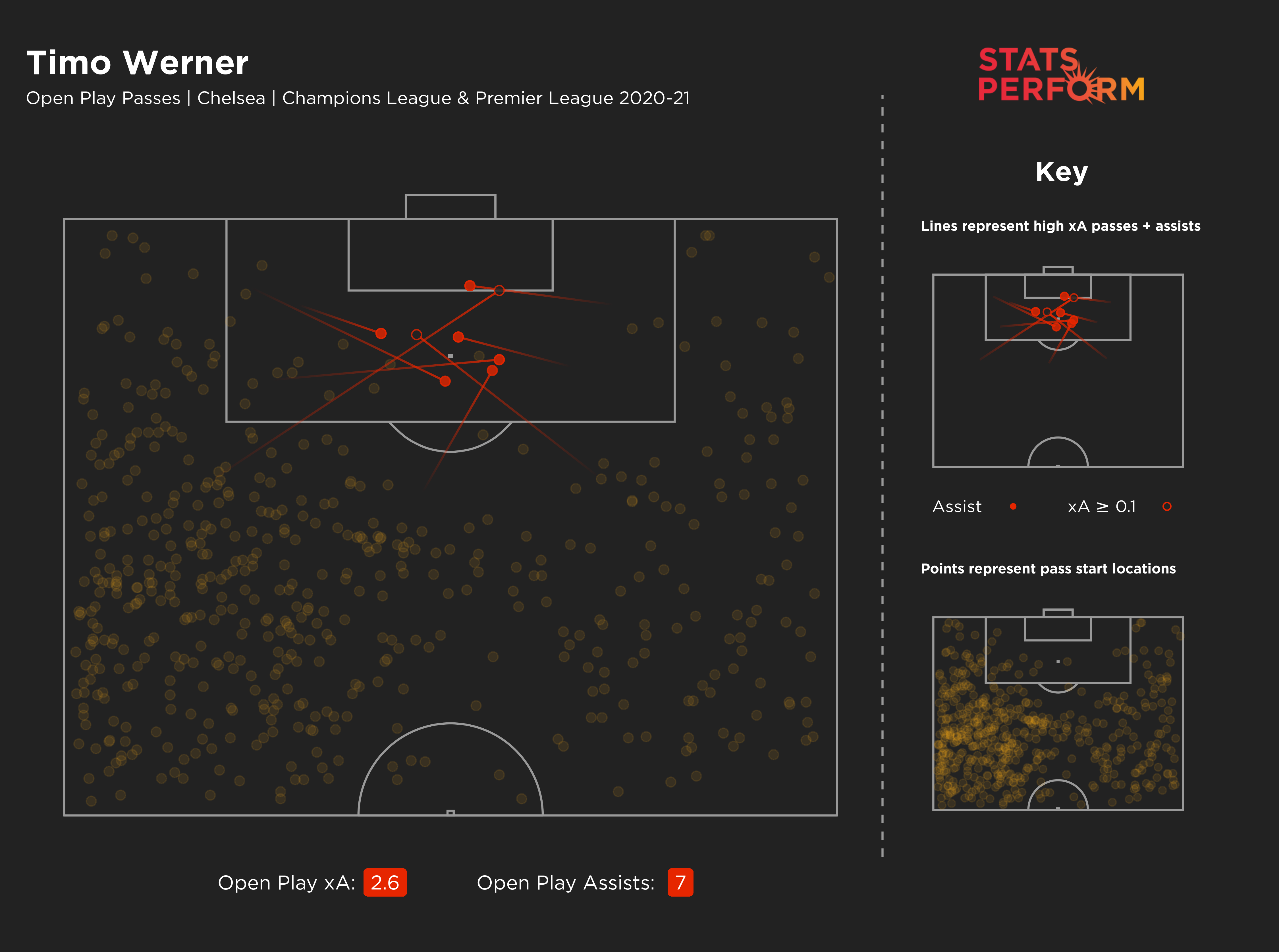 The 25-year-old had fired wide a little earlier after Ziyech missed a kick, but he backed his team-mate to get it right this time.

Werner drew a brilliant save from Jan Oblak early in the second half and lashed into the side netting after his speed had again tormented Atleti.

Part of a collective also going at full tilt, he only has one goal under Tuchel so far, but 10 overall and seven assists this term are more goal involvements than any other Chelsea player in 2020-21.

There lies one of the joys of this 13-match unbeaten run for Tuchel. He has had a watertight defence in place from the get-go. Now, an all-star attack is just starting to shine.

When he delighted on Ajax's phenomenal run to the semi-finals in 2018-19, Ziyech showed he loved this stage.

He particularly loves to grace it with his sumptuous left foot, but Werner's cross was so immediate and so precise, he had to stick his weaker right on the end of it.

Oblak could not keep the shot out and four of Ziyech's Champions League goals have arrived against Spanish opposition. Roll on Real Madrid in the quarters?

The 27-year-old was evidently enjoying himself when he jinked into space on halfway and released Werner early in the second period – his three key passes in the match level best for Chelsea alongside Reece James, whose deliveries from right-back were majestic.

That was actually a touch under recent par for Ziyech, who is creating an average of 3.6 chances per game in the Tuchel era – taking his 2.4 under Lampard up a notch.

By the time substitute Emerson Palmieri thundered home in stoppage time to seal a 3-0 aggregate triumph, there could be no question Chelsea's attacking stars had shown up.

Maybe they could go all the way – a Champions League miracle form the rubble of the Lampard era.