Xavi has continued his strong start to life in Qatar, scoring his first goal for Al-Sadd in a 2-2 draw with Umm Salal. 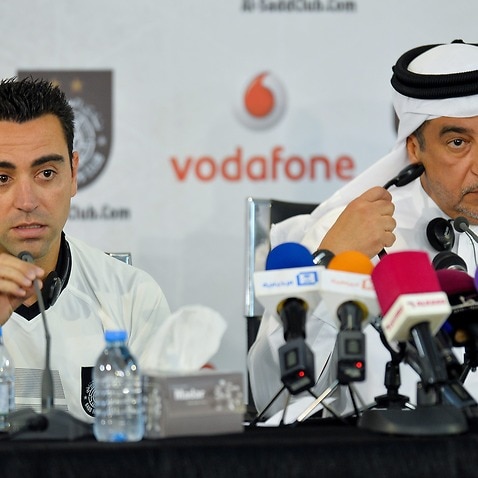 Former Barcelona captain Xavi notched his first goal for Al-Sadd and produced another assist but could not lead his new club to victory on Thursday.

Al-Sadd conceded an 84th-minute equaliser to draw 2-2 with Umm Salal in a top-of-the-table clash in the Qatar Stars League, but Xavi's side remain in pole position on goal difference after two games.

The Al-Sadd's skipper then produced a classic chip over the defence to set up Mosaab Khoder three minutes later but Nasser Saleh struck with six minutes remaining to secure a share of the points for the visitors.

Al-Sadd coach Hussein Amouta was frustrated with his team's performance.

"To be brutally honest, our defence did not play its role properly and I do not know the secret to this," he said.

"It is enough to say that Umm Salal managed to score their first goal through their very first counter-attack and although we managed to return to the game and got two goals, another defensive blunder brought the match back to the starting point.

"This is what we did not wish to happen; we are playing for the title and we should not lose two points at the beginning of the campaign."