It’s only March and what a year it's been already for women’s football in Australia. Yet there is still much work to be done to lift the W-League to a level that the players deserve.

With the Matildas qualification for the 2016 Rio Olympics already a reality and a Collective Bargaining Agreement in place for the women's national team players just a few months ago, there truly has been cause to celebrate. Not only that but a profoundly historic moment took place in January this year when Professional Footballers Australia convened the first ever W-League player meeting on the same day as the W-League Grand Final.

Attended by over 40 players with a strong representation from each club, there was a collective belief that this wouldn’t be the last time we’d see them all together to affect change in women’s football.

This weekend represented another day of firsts, with player delegates from all nine W-League clubs across the country coming together to address the state of the women’s game in Australia at the PFA office in Melbourne.

At the core of the discussion were the results of a recent W-League survey conducted by the PFA, which saw 111 of the 177 W-League players answer questions concerning current playing standards and conditions.

The data was presented by PFA Player Relations executives, and well-known former players, Simon Colosimo and Kathryn Gill - who had worked closely on the development of the survey over several months.

Never before had data of this magnitude been collected from W-League players and the results were nothing short of startling - for all the wrong reasons.

Some of the player statements were:

:: I don’t get paid at all from the club. Ever. I have never received any form of payment for playing.

:: My season salary equated to approximately $6 per hour.

Unfortunately, it got worse.

Some of the players revealed that they had no facilities to get changed in and were often forced to do so in carparks or, in some cases, on the street.

:: Our change rooms didn’t have showers but we were told we could go and shower across the street at the entertainment centre.

Others said they were required to pay for their own surgery and physiotherapy appointments for injuries that occurred during the season as contracte  players.

:: I’ve paid for a lot of my own medical expenses and have had to chase the club up for reimbursements. I am still waiting.

One player confessed that during a W-League fixture, the home team had run out of water bottles by half-time on a day that saw temperatures reach 36 degrees celsius.

:: We got told that the FFA only allocates a certain amount of water bottles per player but surely that’s not a good enough reason why there wasn’t enough water provided for the team?’

Between clubs forgetting to book accommodation, players struggling financially and playing at five different ‘home grounds’, it’s difficult to assess just which scenario is the worst.

This prompted me to wonder, ‘Why do they do it’? and ‘Why don’t they just quit?’

Don’t worry, they’ve thought about it - a lot.

Prior to hearing these stories, many have made the mistake of thinking that these players are 'lucky' because they’re being paid to do what they love, except it’s anything but a dream.

The conditions are abhorrent, the financial rewards little to none and the incentive to pursue football as a career is virtually non-existent.

These circumstances pose a real threat to the future of the women’s game in Australia and with the recent success achieved by the Matildas, it’s polarising to consider that much of that good work could be undone in some way.

Without these athletes sacrificing their lives to commit to this sport, a sustainable women’s league in Australia does not and will not have a future.

Sure, it’s easy to say that there will always be other players waiting in the wings to assume their positions but before long, they too will tire of the contempt and the poor conditions, leaving the league to suffer in a perpetual state of stagnation and perhaps even stare down the barrel of extinction.

The fact is, these women aren’t asking for much as evidenced by the preliminary data.

"The players are not sending the game broke, they just want the minimum wage because after all, they are employees, like everybody else," Colosimo said.

They just want a place to get changed in, shower in and feel safe in.

They want to know that their bodies will be taken care of, that they’ll have a meal to eat that’s more supplementary than plane food and should they become injured, that they won’t lose all sources of income.

On paper these are basic rights you would expect any athlete that takes part in the national women’s competition to be afforded.

To these women though, providing these conditions would mean the world to them and go a long way in contributing to the overall quality on the park.

"It’s not too big to say we want to be the best women’s football competition in the world but in order to do that, we need to create an environment that the best players available want to be a part of," Colosimo said. 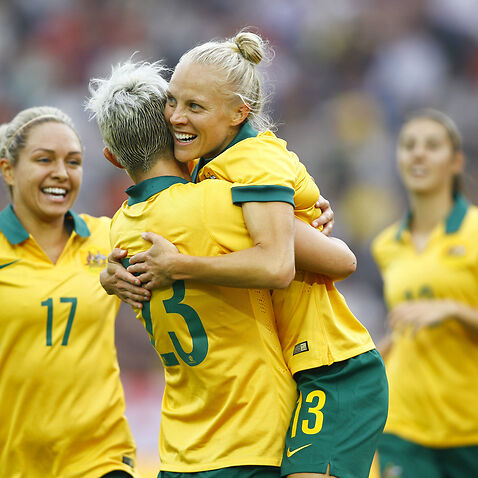 As it stands, there is no CBA or minimum standards in place to protect W-League players and the disparities between the clubs’ expenditure on these teams is massive.

When Perth Glory won the league in the 2014-2015 season, the club spent just over $50,000 of the $150,000 salary cap - this included player wages and all operational costs associated with managing the side.

When Melbourne City won the league in unprecedented fashion this year, the club spent the entirety of the cap and you don’t have to look too far to find the proof of what doing so achieved - it’s sitting in their trophy cabinet.

Of the 12 games played, 12 were won along with a Premiers' Plate and a Championship title to boot.

With statistics like these, it’s difficult to mount a reasonable case as to why a modest financial investment into W-League clubs couldn’t see the league reach unimaginable heights - better conditions means better players and better players equals bums on seats with projected revenue for clubs.

All it needs is the governing body to take that leap of faith or risk another unsavoury public spectacle.

After all, the Matildas have the best, and only real, shot of winning a World Cup. Investing more into women’s football at a time when grassroots participation levels amongst young girls are at an all-time high also makes perfect sense.

It’s for this very reason that the players have chosen to collectively unite in a bid to change the standards. Not just for themselves - they may never see the benefits of what a CBA could do - but for those who are to come.

As custodians and lovers of the game, it is also our job to protect these players and advocate for better conditions to ensure that football becomes not only the leading sport in Australia but long outlasts whatever legacy any one of us could hope to leave.

In order to affect change, you have to be driven by the belief that it can be done and these players have that and then some.

They are not just footballers, they are intelligent, articulate and determined young women who have made the decision to lead this game to true greatness.

As the great Pele once said, "Success is no accident. It is hard work, perseverance, learning, studying, sacrifice and most of all, love of what you are doing or learning to do."

With the progress that was made in the meeting on Saturday, my guess is, the next few months will see these W-League players teaching us a thing or two.