WATCH our next of 10 FIFA World Cup classic matches - Australia v Japan from the 2006 World Cup -  Sunday May 30 at 3pm (AEST) on SBS and streamed via The World Game website / app and SBS On Demand.

"There was a lot of critics talking about us but we're back, so suck on that one.”

Kerr’s fired up message to “the haters” sent shock waves around the world following an incredible comeback victory over Brazil at the 2019 tournament.

Tune in to @SBS/@SBSOnDemand on Thursday at 2:30pm (AEST) to re-live the incredible comeback victory from the Matildas against Brazil in 2019. pic.twitter.com/5HBf2mgZfU

The 3-2 triumph was rather symbolic of Australia’s journey to France; filled with adversity, drama and a determination to prove the doubters wrong.

But if Alen Stajcic’s surprise sacking just five months out from the World Cup divided the Australian media, the Matildas’ opening loss to Italy only made matters worse.

The off-field distraction had damaged a group stage supposed to set the tone for a historic run past the quarter-finals and, after another 38 minutes in Montpellier, Brazil, too, had headlines heeding Australia’s rapid regression written and waiting.

Despite enjoying the majority of possession, new coach Ante Milicic found his 4-3-3 formation nullified by a compact Canarinha outfit flooding their defence in numbers and thwarting the space in the final third.

Then-Brazil coach Vadao had deployed a 4-1-4-1 setup structured to perfection, with their 2-0 lead coming both in transition and against the run of play.

For what Marta’s penalty - her 16th World Cup goal - lacked in creativity, Cristiane more than made up for some 10 minutes later.

A Tamires nutmeg fed Debinha inside an unsuspecting Ellie Carpenter, who could only watch as Cristiane scored her fourth goal of the tournament with a header beyond a diving Lydia Williams.

Such a scoreline left Milicic’s women rattled heading into half-time, but not before Caitlin Foord found fortune from a Chloe Logarzo flick-on with seconds winding down.

Foord’s goal seemed to inspire hope within the Matildas going into the second-half, who for the first time, were starting to find combinations on the flanks - a staple of their style under Milicic.

That tactical shift soon created several more chances for the likes of Kerr and Tameka Yallop, and, in the 58th minute, the pressure finally told.

Kerr’s near-post run fooled Brazil goalkeeper Barbara, who was left wrong-footed as Logarzo’s cross travelled untouched and into the back of the net. 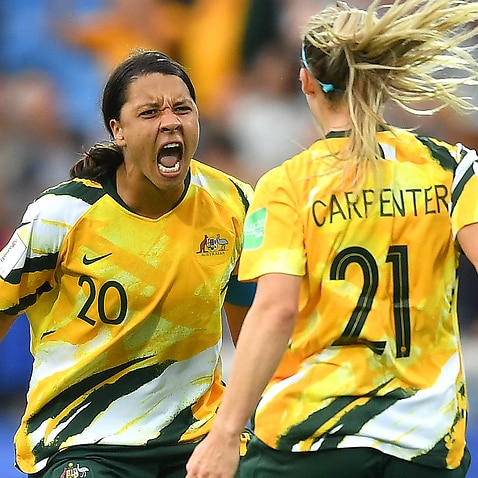 With parity restored and Brazil reeling, Milicic implored his side to continue testing the opposition under the high ball - Australia’s superior strength and size causing too much trouble for Vadao to counter.

Six minutes later, and Kerr was it again; forcing yet another Selecao mistake at the back.

A lengthy VAR review eventually deemed her offside run irrelevant to the play as Monica failed to divert a searching Emily van Egmond ball away from her own net.

The go-ahead goal sparked deserved relief for the Matildas, and they eventually held on to become just the second team to successfully overcome a two-goal deficit in Women’s World Cup history.

Australia’s comeback - against Brazil, no less - would normally afford enough satisfaction to one set of players, but, for their captain, this victory will remain a testament to her side’s incredible resolve in the face of their detractors.

"One game was not gonna derail our World Cup hopes - and that's why it was so frustrating for us because instead of the media being (like), 'we can turn this around', it turned negative on us and it only fuelled us, so thank you."

No Sam, thank you.