Western United's Victor Sanchez struck in the fifth minute of injury time to secure a 4-3 win over Melbourne Victory.

Victor Sanchez was the hero with a 95th-minute winner to secure a dramatic 4-3 win for 10-man Western United over A-League rivals Melbourne Victory.

English import Rudy Gestede looked to have grabbed a share of the points for his side at Marvel Stadium on Saturday night when he made the most of Tomislav Uskok's sending off to level the scores with eight minutes left to play.

Uskok was controversially handed a second yellow card when he was judged to have clipped Victory winger Robbie Kruse and debated the decision as he made his way off the pitch. It mattered little as Spanish midfielder Sanchez pounced on a loose ball in the box in the final minute of injury time to put the full-stop on a night of high drama.

It sparked wild celebrations, with coach Mark Rudan charging onto the pitch to join in.

Earlier, Callum McManaman opened the scoring for Victory with a sweet volley on the end of a beautifully crafted move, which began with the impressive Dalibor Markovic.

But Sanchez levelled proceedings before the break and the visitors were in the box seat when Besart Berisha twice nodded home crosses from Italian magician Alessandro Diamanti in the second half.

Jacob Butterfield breathed life back into the match with a long-range strike and the see-sawing derby turned on its head when Uskok was given his marching orders. 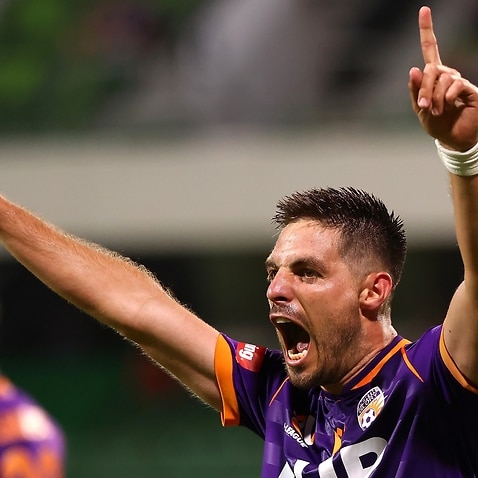 Former EPL striker Gestede - the two-goal hero in Victory's much-needed win over Wellington four days earlier - blew one chance to make the most of Uskok's absence when he fired a header straight at Western keeper Filip Kurto from close range.

He didn't waste the second, levelling the scores with time still left to mount a case for Victory to grab a second successive win.

It wasn't to be as Western's Sanchez bobbed up with one of the final kicks of the game to give his side all three points.