Western United have been forced to settle for a fiery 0-0 draw with A-League rivals Melbourne Victory after spurning a plethora of late chances at AAMI Park.

United found the back of the net twice but had both goals ruled out for offside while Victory also had wasteful moments in a feisty clash.

The game was United's first of four home games at Victory's home ground this season, though a majority of the 7016 fans were in navy blue.

Victory rested Robbie Kruse and Marco Rojas enjoyed a scintillating start in the Socceroo's central attacking role and should have had an assist on the break in the 10th minute.

Rojas controlled a Maxime Crocombe long ball, charged forward and slipped a pass to Brandon Lauton, who smacked his shot into the post. 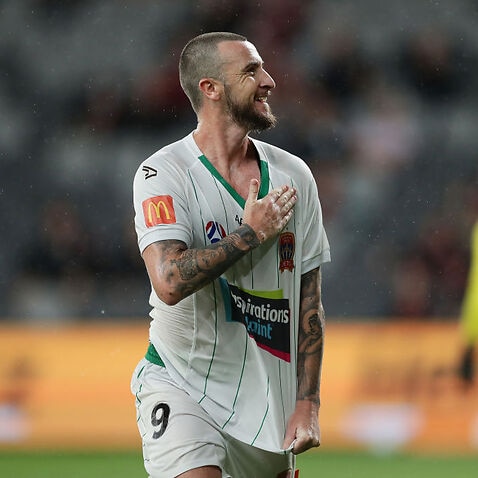 Jets fight back to snatch draw against Wanderers

United almost snatched the lead against the run of play when they had a goal chalked off in the 36th minute.

Connor Pain received a pass from Victor Sanchez, then had a shot blocked but quickly followed up, working the ball for Besart Berisha to hit home on the half-volley.

But a VAR review showed Pain had been offside in the build-up, with the goal ruled out.

Victory had a chance shortly after the break when Luis Lawrie-Lattanzio flashed a header wide but United soon took control, with Iker Guarrotxena's 55th-minute introduction providing a spark.

In the 72nd minute, Guarrotxena closed down Dylan Ryan, then followed up to force an excellent near-post reflex save from Crocombe.

A minute later, United skipper Alessandro Diamanti clattered a shot off the bar, before ripping an even fiercer strike off the woodwork in the 76th minute.

A minute later Dylan Pierias was put through on goal, burst past the Victory defence and fired home - but was ruled offside.

Pierias didn't see the linesman's flag and wheeled away in celebration, only to be cruelly brought back down to earth.

In the 89th minute, United goalkeeper Filip Kurto made an excellent diving fingertip save to deny Victory's Birkan Kirdar and leave the game a stalemate.