Australia Under-23 midfielder Mustafa Amini has dismissed the option of a return to the A-League as scouts from Denmark and Belgium descend on Germany to watch his penultimate appearance for Borussia Dortmund II.

The out-of-contract Amini – who made the bench but never Jurgen Klopp's senior side in three seasons with the Bundesliga monolith – will be under the microscope against Dynamo Dresden on Sunday (AEST) as he heads towards the exit door of the club he joined from Central Coast Mariners as a teenager.

With the chance to help the Olyroos qualify for the Rio 2016 Olympics up for the grabs and also the lure of a spot in the Socceroos squad as it hits the long road to Russia 2018, Amini is hunting regular first-team football and the opportunity to step from the shadows of Germany's third tier. 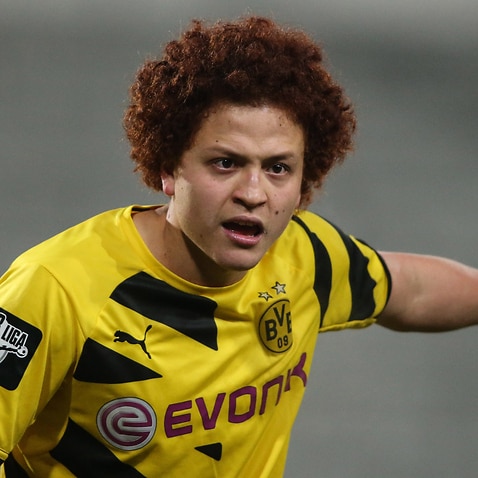 His agent, Sydney-based Buddy Farah, has arrived in Europe to find a new home for the 22-year-old with Danish Superliga outfit Randers and Pro League club KVC Westerlo the first to show a strong interest.

Farah insisted the A-League was not a prospect for Amini, who remains committed to pursuing a European dream that has only been emboldened by his experience at Dortmund where he has trained with some of the continent's crème de la crème.

"Musti's goal is to be playing senior team football ... at this stage of his career that's what he has to do to continue his development and hopefully it will lead him into the Socceroos," said Farah from Germany.

"There are a number of clubs watching him at the moment and we are hoping to secure his future over the next fortnight or so.

"A lot of people don't realise how tough the third league is in Germany and there's no doubt Musti has made significant progress in his time here and he is ready now for the next challenge.

"His focus is all about remaining in Europe and he's not entertaining any thoughts of returning to the A-League.

"He came to Germany to make a career in Europe and he's not turning his back on that. He has a plan and a strategy and he's intent on executing it.

"Patience is the key in formulating his next move and I won't sleep until I find him the right move. We have some heavy hitters working around him to make that happen also." Amini not temped by offer to ditch Australia for Afghanistan

With Dortmund II locked in a relegation battle - it sits two points from safety three places off the bottom - Farah said Amini, who has made 26 appearances this season, has been shackled by the brand of football the team has been playing.

"There has been a lot of long ball stuff because they have been in a relegation fight, which doesn't suit a player like Musti," explained Farah, who represented Australia at Under-23 level and Lebanon as a full international.

"When they do play it on the floor, Musti tends to come into his own."