In just four days, it will be two months since Football Federation Australia announced that the A-League season was being suspended indefinitely due to the COVID-19 outbreak.

In that time, a considerable amount of angst over the future of Australian football has erupted and sparked intense debate, but all of it has been punctuated by an insatiable appetite for much-needed reform.

From things like youth development to registration fees, the controversial role of member federations, a national second division, the governance model, expansion, the game’s financial viability and the future of women’s football.

All of this has been discussed robustly with a clear theme emerging - Australian football needs to change.

Throughout it all, we are still left wondering when, and if, the A-League will resume - and with states scrambling desperately to return to play, the professional game and its constituents continue to suffer through this painstaking period of indecision, perpetuated by the governing body and clubs. With just a few rounds of the competition left to play, the lockdown restrictions easing across the country, both the NRL and AFL developing clear strategies and some European leagues already resuming, you could be forgiven for asking: What the hell is taking so long?

When I spoke to a source closely connected to the discussions between the stakeholders, they revealed that there was a “lack of leadership” and that “at least two or three clubs don’t want the competition to resume”.

It’s a claim that FFA chief executive officer James Johnson denied when Craig Foster and I interviewed him and Socceroos coach Graham Arnold this week, simply saying “all the clubs are on board to restart the competition, it’s just a matter of when.” 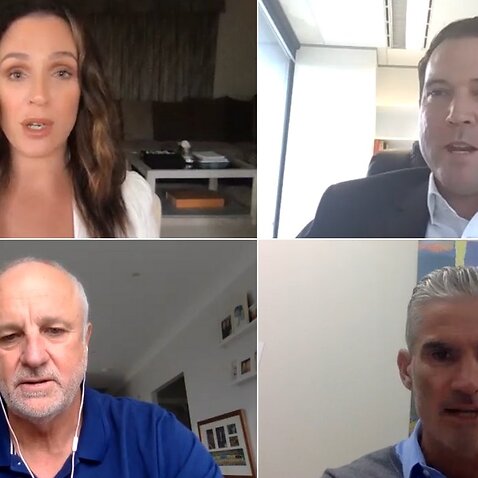 “I don’t think that’s too far away, I think in the next one to two weeks, we’re going to be in a position where we have a fully aligned position between FFA and the clubs on what the specific date would be to restart the league," Johnson said.

It was the first time we had spoken to Johnson since he commenced the role in January, and to say that it’s been a baptism by fire would be putting it mildly.

Johnson has unenviably inherited a game that has been fractured from the professional tier right through to the grassroots for some time now, and has been plunged into an economic crisis due to the global pandemic.

However, the silver lining amidst the chaos is that we’ve been presented with an opportunity to recalibrate Australian football but the biggest question of all is: Will the moment be seized or are we forever doomed to repeat the mistakes of the past?

The chasm between where we are as a sport and where we would like to be has grown at a catastrophic rate over a number of years and been underpinned by a glaring failure to learn from our predecessors.

Every decaying ideal and lofty ambition that has been sold to us by the snake oil traders, who have populated the FFA’s offices at various junctures in our history, has further stunted our ability to reach our full potential.

As Branko Culina aptly put it when I spoke to him recently: “Football has survived in spite of everything that we continue to do to it”.

But when you consider that our game boasts the highest number of participants at the grassroots level, “surviving” is simply not good enough - we want to be thriving.

Make no mistake, we have made enormous strides since the demise of the National Soccer League in 2004, but for every positive inroad, there have been a series of gargantuan missteps that have ultimately led to failed expansion franchises, disengaged fans, a justifiably frustrated broadcaster and a football infrastructure that isn’t aligned and operates fiscally on a bottom-up approach.

The most alarming thing is - these very conversations have been had for over 30 years and Graham Arnold reflected these sentiments when he said “we all loved Johnny Warren. Unfortunately he died in 2003, but we’re still sitting here probably talking the same talk that he would be, if he was here today”.

We’ve heard enough broken promises, read endless media releases about committees being formed with no outcomes, witnessed millions of dollars misspent and watched people come and go through the halls that have barely left a mark.

As Frank Farina said - if we don’t change now, “the future of Australian football is bleak”, and although we don’t know the next six months may look like, one thing’s for sure - the status quo cannot continue.

At the conclusion of our wide-ranging discussion with Johnson and Arnold, I asked James what he hoped to bring to the role of FFA CEO, with good reason.

I wanted to know firstly, what we could expect and secondly, if it’s what we would one day remember him for.

He listed off three things which involved “bringing people along for a ride”, “being a local but global organisation” and “bringing football back into the core of the organisation” which was incredibly pleasing to hear when he explained them in full detail.

It’s also important to consider though, that when David Gallop was unveiled as FFA CEO in 2012, he said that one of his ambitions was to make football the number one sport in the country, which at the time was admirable but hindsight proved that the governance structure he was deployed in, and the people he was surrounded by, was never designed to support that.

Speaking to former FFA board member, and Socceroo, Jack Reilly last month, he revealed that Gallop came into the role seeking knowledge about the organisation and the state it was in, both culturally and operationally, but with time - his good intentions were drowned out by an autocratic and self-motivated leader.

Effectively, it hasn’t mattered who assumes the position - the organisation and the game’s politically-charged modus operandi has been such that it will never provide the CEO with the opportunity to affect great change and when eventual failure strikes, they will become the scapegoat and their tenure shrouded in disappointment.

I hope this won’t be the case for Johnson, whose success will be determined with time.

But right now, it’s incumbent on all of us - within the football fraternity - to not shy away from constructive debates when it concerns the future of football.

And finally, to those who have been granted a position of power within the game - youhave been entrusted as a custodian during a defining moment for our sport: choose wisely, work for the greater good of the game, raise your voice if you are witnessing inaction and injustices or you too could be tarred with a disappointing brush.