Western Sydney Wanderers have ended a difficult A-League season on a high note with a 2-1 win over Melbourne Victory at Bankwest Stadium.

In his final game of professional football, Wanderers midfielder Pirmin Schwegler signed off in style with a spectacular goal in the 34th minute.

Jordan O'Doherty doubled Western Sydney's lead in the 62nd, with Andrew Nabbout snatching back a goal for Victory in the 66th.

The Wanderers almost started the game with a bang when Matt Jurman attempted a long-range chip in the ninth minute but Matt Acton was able to tip the shot over the crossbar.

Victory's forays on goal were rare in the first half and the Wanderers were rewarded for repeat efforts when they broke the deadlock in the 34th minute.

Captain Mitch Duke whipped a cross into the box, where Simon Cox controlled the ball then laid it off to Schwegler, who sizzled a shot past Matt Acton.

Victory were unable to respond in the first half and in the 62nd minute, Duke was involved in Western Sydney's second goal, skidding a left-footed cross towards the near post for O'Doherty to turn home.

Lleyton Brooks slipped a ball through for an advancing Leigh Broxham, who squared it for Lawrie-Lattanzio.

The teenager flicked it on for Nabbout who, kept onside by the Wanderers defence, tapped home.

Nabbout had the ball in the back of the net in the 83rd minute but was well offside and despite looking lively, Victory were unable to snare a point. 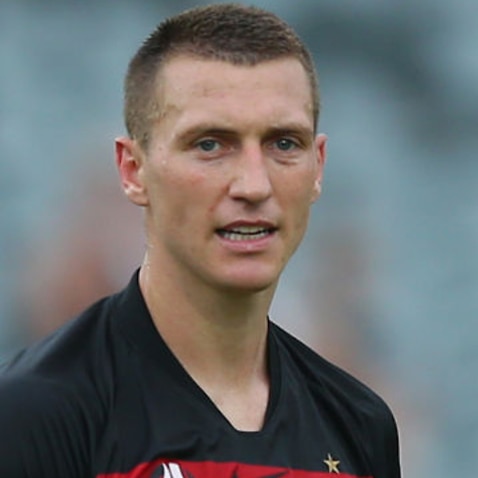 Wanderers skipper Duke set to sign for Saudi side Al-Taawoun

Victory was without Marco Rojas (hamstring) while it was Nabbout and James Donachie's final game for the club, with the pair to depart for Perth and Newcastle respectively.

Meanwhile it was likely Duke's last game in red and black, with the striker expected to sign with Saudi club Al-Taawoun.