Goalkeeper Danny Vukovic has made such a positive and lasting impression on Belgium's Racing Club Genk that they will continue to pay him until his contract expires in June even though he has been allowed to leave the club.

Genk have not forgotten the key role the Socceroos' nominal No 2 custodian played in their Jupiler Pro League triumph in 2019.

Vukovic signed for Genk in 2017 and soon became their regular first-choice goalkeeper except for a period of one year out of the game when a freak injury in the gym deprived him of realising his dream of playing in the UEFA Champions League.

Last month he lost his starting spot to young Maarten Vandevoordt after a home 2-1 defeat to Anderlecht and he has not played since. Coach John van den Brom indicated he was putting his faith in Vandervoordt and as a result Vukovic and the club agreed to part.

"My contract runs out at the end of June," Vukovic, who will be 36 on Saturday, said before flying out to Sydney to be with his pregnant wife Kristy and son Harley.

"I didn't terminate my contract as has been reported. The club is continuing to pay me as a token of their appreciation for what I've done for them. 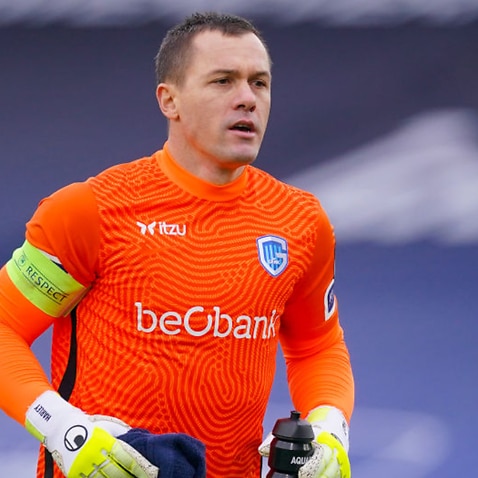 "I cannot thank them enough. Genk are a big club that enjoy huge respect throughout Europe. Just have to look at the players that have come out of there, such as Kevin De Bruyne and Thibaut Courtois. But they are also a family club and they put the players' welfare first.

"To let me go and keep paying me till June is a beautiful gesture, amazing really."

Vukovic, who was surprised to see a group of Genk supporters turn up at his house to give him a warm send-off before he made his way to the airport, has left the club with a heavy heart.

He will always cherish the great memories, particularly those surrounding the Pro League and Super Cup wins in 2019.

"I'm really sad to be leaving KRC Genk. It has been an emotional few days. I fulfilled a lifelong dream by coming to Genk and achieved so much in my time here.

"I had the club's full backing to go home to be with my family to support them in the final weeks of my wife's pregnancy. I will go home now and continue to train with the Socceroos' coaching staff to stay fit and have my agent Mikkel Beck speak with clubs in Australia and overseas to see where the next chapter of my career will begin."

Vukovic, who helped Sydney FC win the A-League championship-premiership double in 2017, will have to be in quarantine up to April 5 after he arrives in Sydney on Monday night.

It will be a small price to pay to be able to enjoy the life he knew before he left Australia four years ago to realise his ambition to play professionally in Europe.

"I'm excited to get home and see family and friends," he said.

"Also, the coronavirus situation is very good in Australia compared to that in Belgium. COVID has been terrible here. Imagine this, I have not been to a restaurant or cafe for more than a year.

"I'm looking forward to living the Australian lifestyle once again."