Sneijder's revelation came in a reading from his autobiography via ESPN.

The Dutch midfield maestro joined Real Madrid from Ajax in a €27 million (A$44m) move when he was 23 years old, becoming an instant star as the capital club won La Liga.

He also had big struggles, however, as detailed in the book:

"I was young and enjoyed the success and attention," Sneijder said.

"It must have gone wrong there -- later. No drugs, but alcohol and 'rock-and-roll'.

"I got used to that, as one of the stars... You are worshipped as a Real player. 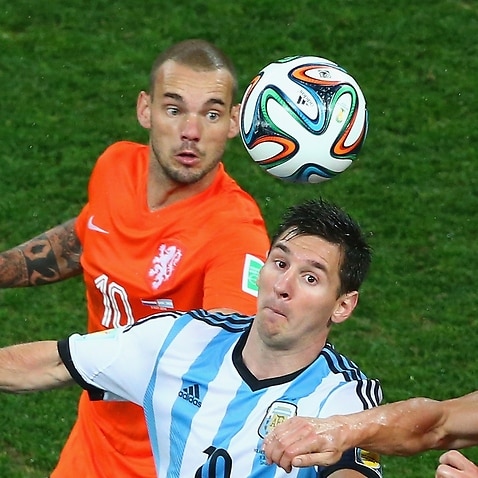 "All your missteps are instantly forgiven because of your status and popularity.

"Even if I rolled over the street and spent thousands of euros, or gave rounds to the whole bar. I cannot say that I resisted enough."

A big part of the problem was going through divorce: "I was left alone and didn't see the little one, Jessey, much, that was s***. And I'm bad at being alone.

"Why would you even be alone when you have enough friends to spend your time with?

"I just didn't realise that the bottle of vodka became my best friend."

His form dipped and he was encouraged to change by Real Madrid and his fellow Dutch teammates Ruud van Nistelrooy and Arjen Robben, though he admits his attitude was not at the required level. "I played pretty well, but they said I could do even better," he said. "I still played a lot, but not so good and sharply, less concentrated.

"My attitude was unworthy of Real Madrid.

"I lied to myself that it was going well and I held my own by my football intelligence.

"Physically I deteriorated. I ran less, covered up a lot with my technique and my kicking technique. I also thought no one noticed."

Real Madrid sold Sneijder at a cut-price €15 million (A$25m) to Inter Milan in 2009, where he formed a fantastic relationship with coach Jose Mourinho and shot back into red-hot form.

He was arguably the Nerazzurri's best player as they won the UEFA Champions League, Serie A and Coppa Italia treble, while also becoming joint-top scorer at the 2010 FIFA World Cup as the Netherlands reached the final.