A-League club chiefs insist the proposed hike in visa player slots isn’t designed to impede the emergence of local talent, despite ongoing criticism of the plan to raise the number of foreigners from five to six as early as the January transfer window.

But Brisbane Roar vice-chairman Chris Fong - who doubles as vice-chair of the Australian Professional Football Clubs Association (APFCA) - claims an emerging blueprint for an expanded National Youth League and heightened vigilance over the quality of imports will ensure local prospects don’t pay the price.

“Right now there is a bit of a quality gap which needs addressing by bringing in the right type of visa player,” said Fong.

“But they have to be players who genuinely enhance the league and we need to look very closely at that.

“They should only be filling positions where we can’t find an Australian player in that position at the right level.

“The aim certainly isn’t to take opportunities away from Australian players.” 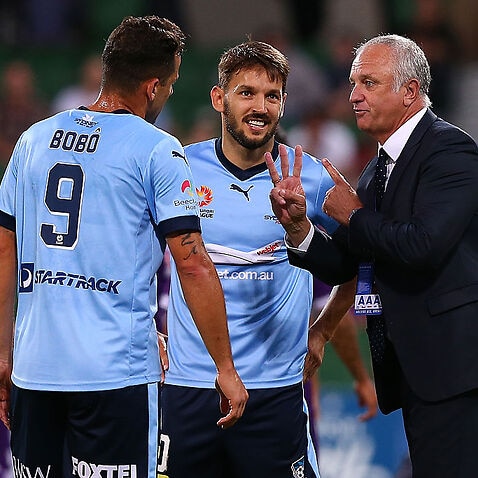 The move to increase the foreign contingent is seen by Arnold as a roadblock to the hopes of homegrown kids with a negative spin off for the national teams whilst Merrick derided the plan as “ridiculous” and wants the quota cut to four.

However Fong pointed out the investment in youth made by the clubs with their academy system and championed an expansion to the eight-game NYL.

“Getting younger players more game time is very much part of the thinking of the new set up,” he added, referring to the clubs taking control of their own destinies after the separation of powers from FFA.

“The youth league has been a bit of mess for the last few years and we want to beef that up with more games and give the younger players more of a platform to impress and graduate seamlessly to the senior teams if coaches believe they’re good enough.

“We haven’t finalised a strategy on that quite yet in terms of its execution but that’s the direction we’re heading in. “What Graham has brought up about giving opportunities to younger players has broad support and we want to see more of them graduate to the A-League.

“At Brisbane, for example, we have the youth team training predominantly with the A-League team so we can switch around and that’s a great opportunity for the players.

“We all want to see our youngsters playing more games at a higher intensity and level.”

Fong understands the sentiments of those who doubt the wisdom of opening the foreign floodgates, but he also believes some of the criticism is unfounded.

“It’s all very well to question the clubs in getting players, for example, from the lower leagues in the UK,” he said.

“You can question some leagues in terms of quality but I feel we’ve been very prudent with our signings at Brisbane.

“We are certainly not about bringing a foreign player in from a lower league in Europe just for the sake of filling a spot. I wouldn’t be happy about that at all and it’s something we need to look at.”

With the club bosses meeting in Sydney on Wednesday over a raft of issues as they take control over the running of the league, Fong added: “I don’t think you’ll see significant changes before the New Year and the January window but that’s OK because we’re moving in the right direction.

“The process is about signing off the final separation from FFA and how we move forward from there.

“If we talk about visa players and a whole range of things some will still need FFA approval. Even the EPL needs FA approval in certain aspects of its operations.

“We won’t have carte blanche to do whatever we want - we still need to work with FFA and a bunch of other stakeholders.”