Melbourne Victory has eased pressure on under-fire coach Grant Brebner with a Rudy Gestede double powering the former A-League heavyweights to a 2-0 win over Wellington.

Former EPL player Gestede, who signed with Victory in November, slotted his first A-League goal after heading in a corner from Jake Brimmer just before half-time.

Victory's first goal in three games saw Gestede lead the team's other 10 players on the field to embrace a delighted Brebner in a huge show of support for the rookie coach. 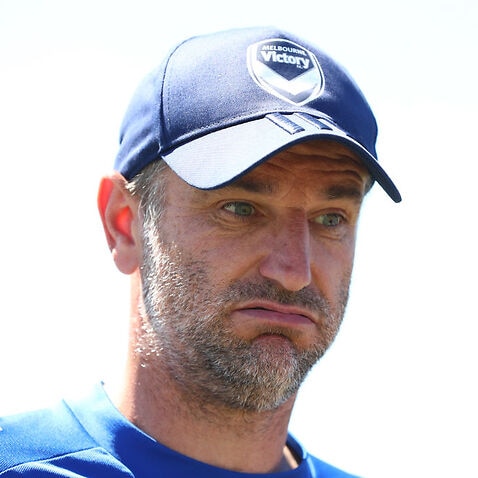 But the tall French-born striker was not done there, with Gestede again combining with Brimmer to double Victory's lead with another header in the 49th minute.

The only downside to getting off the bottom of the table for Victory - and jumping ahead of the Phoenix - was more injury troubles.

Star midfielder Marcos Rojas lasted just 24 minutes in his return from a facial injury after being on the receiving end of a crude challenge from the Nix's Mirza Muratovic.

Defender Aaron Anderson's night was even shorter, subbed off in the fifth minute with what appeared to be a serious knee issue. 'I know what I saw' - Corica slams late VAR non-call

Wellington, who is based in Wollongong this season because of border complications, struggled to create any meaningful chances despite dominating possession in the cellar-dweller clash.

Their only shining light was goalkeeper Oliver Sail, who ensured the defeat was not greater with some crucial first-half saves when Victory was peppering his goal.

Victory will get a chance to win their third game this season when they host Western United in a Victorian derby at Marvel Stadium on Saturday night.