The rapid rise to prominence of brothers Al Hassan and Mohamed Toure has captured the imagination of any true lover of the game in Australia.

Their impact has been so strong and convincing that already big things are being forecast for the two tyros, with all the associated risks.

The Toures' eye-catching performances for Adelaide United this season have vindicated Reds coach Gertjan Verbeek's decision to put his faith in youth, although his hand was forced by injuries to several players.

Al Hassan, 19, and Mohamed, 15, have taken their opportunity with open arms and have suddenly become one of the talking points of the A-League.

They're both physically strong, technically endowed and have that rare capacity to make spectators sit up in anticipation whenever they touch the ball.

Such players with an ability to thrill and change matches are not that common.

Al Hassan, who is injured at the moment, scored one of Adelaide's goals that gave them a 4-0 win over Melbourne City in the FFA Cup final last October. 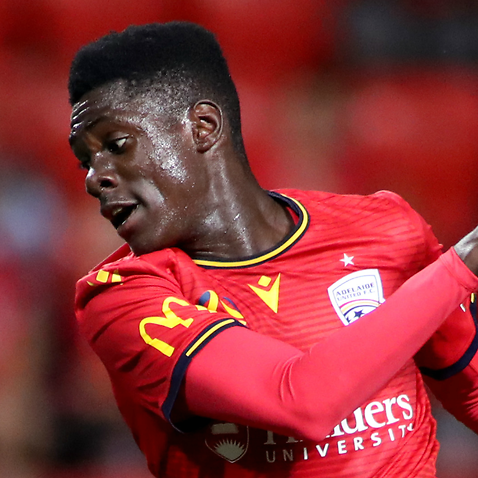 Mohamed became the A-League's youngest ever scorer when he drove home Adelaide's second goal in a 2-0 victory over Central Coast Mariners on Friday.

It is too early to tell if the two attackers are the real deal but indications are that the A-League may have unearthed a couple of raw gems that could give our game the shot in the arm it badly needs in the next few years.

Who knows, if they continue to improve and be nurtured properly and protected fiercely by their club they should become good enough to play for Australia.

Al Hassan has already played for the Olyroos.

The two players were born in Guinea and have Liberian parentage so technically they're eligible to play for any of the two African countries.

Already Liberia's English coach Peter Butler has been sniffing around but the brothers are understood to have indicated to Australian officials that they would love nothing more than represent their 'new' country.

Socceroos coach Graham Arnold has every reason to be satisfied with the depth he has at his disposition.

Yet, he could do much worse than enlarge the national team circle by locking in these two players should the green and gold, as expected, secure qualification to the next phase of 2022 FIFA World Cup qualification with a game or two to spare.

I am fully aware that the Socceroos jersey is something you should earn not one that is given to you for expediency or convenience.

However if the two brothers keep building on their undoubted promise, a brief Socceroos cameo in a dead rubber might be the way to go for everyone concerned.

FIFA rules state that an eligible player is free to choose which team to play for until he represents a country at senior level in a competitive match. Then he is locked in.

Striker Martin Boyle, for example, would have been allowed to play for his native Scotland even though he wore the Socceroos jersey in non-competitive internationals.

He became locked in only after facing Jordan in a World Cup qualifier in November.

At this stage, this scenario is purely hypothetical because the Toures, not unlike other promising starlets who were too quickly dubbed 'the next Harry Kewell', have a long way to go to even establish themselves as Adelaide regulars let alone to represent Australia.

It is best for everyone, including the media ,to let them enjoy their football and keep learning their trade and not pile any pressure on them to succeed.

The two Toures are genuine prospects - no doubt about that - but they're not the only ones to have burst onto the scene and thrilled us all with their precocious skills.

And the last thing our game needs is another case of a would-be star buckling under the pressure of expectation.