Leicester still top the Barclays Premier League with their stunning season showing no signs of ending in anti-climax. 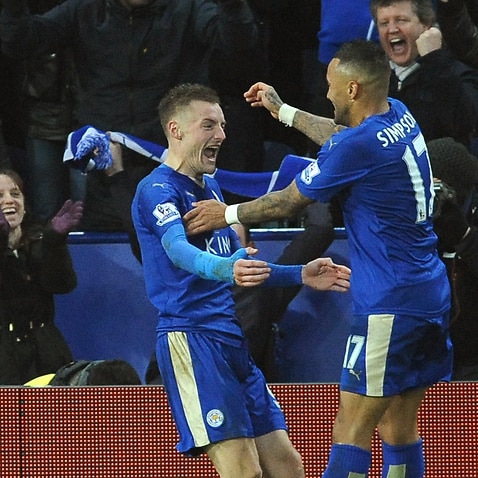 Leicester sweep Stoke aside to go top of the Premier League

Claudio Ranieri's side are three points ahead of Manchester City after their 2-0 win over Liverpool on Tuesday.

They face City at the Etihad Stadium on Saturday, and here are three talking points surrounding the Foxes title challenge.

For all of his know-how Claudio Ranieri has never claimed a top-flight title in his career and most of his players have not been in this position before.

Ranieri helped Chelsea to second place in 2004, claimed the Ligue 2 crown with Monaco in 2013 and won Serie B with Fiorentina in 1994. Compared to Manuel Pellegrini and Arsene Wenger he has the longevity but not the experience of winning a top flight crown.

Robert Huth has two Barclays Premier League winners' medals from his Chelsea days and Gokhan Inler has won the Swiss Super League twice but it is new territory for the majority of the Leicester dressing room.

The core of Manchester City's squad helped them to their two titles in 2012 and 2014 while Mesut Ozil and Alexis Sanchez have won Spain's Primera Division, even if Arsenal have failed to win the Barclays Premier League since 2004.

In Jamie Vardy, Leicester have one of the players of the season and his 18 goals, including his wonder strike against Liverpool, have helped propel the Foxes to the summit.

They have failed to score in just three league games this season but without Vardy and 14-goal Riyad Mahrez, Leicester's next top scorer is Shinji Okazaki with five, proving they cannot afford to lose their star pair.

Jamie Vardy what a goal vs. Liverpool! Golazo! pic.twitter.com/cpm92ewd6C

In defence, the Foxes have the worst backline in the top four, conceding 26, compared to Spurs who have shipped just 19 with Jan Vertonghen and Toby Alderweireld starring. Arsenal have conceded 22 and Manchester City 23.

Ranieri's side must still go to Manchester City, Arsenal, Manchester United and Chelsea ,starting with their trip to the Etihad on Saturday.

The fact they do not have the distraction of European or cup football could be a factor with Leicester's legs likely to be fresh, a fact Manchester City manager Pellegrini has already conceded.

Next two fixtures for Leicester: City (Away), Arsenal (Away). 4 points and they can win the title.

Manchester City will also want a strong run-in to give Pellegrini a title-winning send off, with Pep Guardiola replacing him at the club next season.

Manchester City, Arsenal and Tottenham all play in the Champions League or Europa League and remain in the FA Cup so have heavy workloads, with Pellegrini's side also facing Liverpool in the League Cup final.