Nine days out from the A-League season restart, Melbourne's three clubs are stuck in Victoria after failing to make it across the NSW border on Monday night.

The remainder of the A-League season appears to be at the whim of the NSW government after Victoria's three top-flight teams failed to make it across the border on Monday.

Football Federation Australia will seek an exemption from the NSW government for players and staff after Melbourne Victory, Melbourne City and Western United did not leave Victoria before the midnight Monday deadline for Melbourne residents.

The three A-League clubs scrambled on Monday night, getting players and staff to the airport in a bid to fly to Canberra.

They boarded the plane, only for the flight to be cancelled due to poor visibility at Canberra Airport, leaving them stranded on the tarmac.

Western United captain Alessandro Diamanti recorded the eventful night on his Instagram page - including footage of teammate Andrew Durante loading bags into a car and of players and staff sitting on the plane. 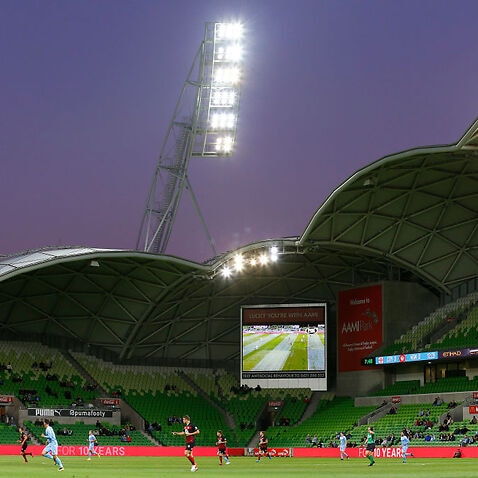 The three clubs had originally planned to fly out on a charter plane on Tuesday - before the full Victoria-NSW border closure from midnight Tuesday.

Victory and United are due to restart the A-League season on July 16, with United then scheduled to play City on July 20.

"As a result, we will now begin the process to seek exemptions from the NSW Government to allow the teams to enter NSW for them to continue their season," A-League boss Greg O'Rourke said.

"If we find it necessary to revise the match schedule we will do so accordingly and will announce once confirmed, however at this time the schedule remains the same."

Other professional football codes had made earlier moves to get their teams out of Victoria amid the state's coronavirus spike.

The 10 AFL clubs departed for NSW and Queensland across Sunday and Monday, the NRL's Melbourne Storm have been out of Victoria for almost two weeks and Super Rugby's Melbourne Rebels moved to Canberra on June 26.