Belgium ended Portugal's European Championship defence with a 1-0 win in Seville, despite losing Kevin De Bruyne and Eden Hazard to injuries in the last-16 clash.

With both sides facing a daunting route to Euro 2020 glory, it was Belgium who emerged to reach a quarter-final tie against in-form Italy thanks to Thorgan Hazard's long-range strike.

It was a goal that deserved to settle a game of few chances, although De Bruyne's substitution early in the second half will concern Roberto Martinez, as will Eden Hazard’s departure late in the match.

Portugal could not capitalise and paid the price for a third-placed Group F finish that condemned them to this side of the draw.

At odds with a tense finale, opportunities were few and far between prior to Belgium's spectacular 42nd-minute opener.

Portugal's Diogo Jota dragged wide and Thibaut Courtois parried a Cristiano Ronaldo free-kick – his first sight at a record-breaking 110th international goal – before Thorgan Hazard blasted beyond Rui Patricio from 25 yards, the ball fading away from a flailing goalkeeper.

Joao Palhinha's challenge on De Bruyne in the 45th minute saw the Belgium midfielder substituted shortly after the restart, but Portugal did not respond until the introduction of Bruno Fernandes and tournament debutant Joao Felix.

Ronaldo teed up Jota to flash a strike over and Joao Felix got up to meet Renato Sanches' cross, only to head into Courtois' arms.

An ill-tempered affair threatened to tick by without Portugal seriously threatening an equaliser, but Ruben Dias headed straight at Courtois and Raphael Guerreiro struck the post, agonisingly close to forcing extra time. 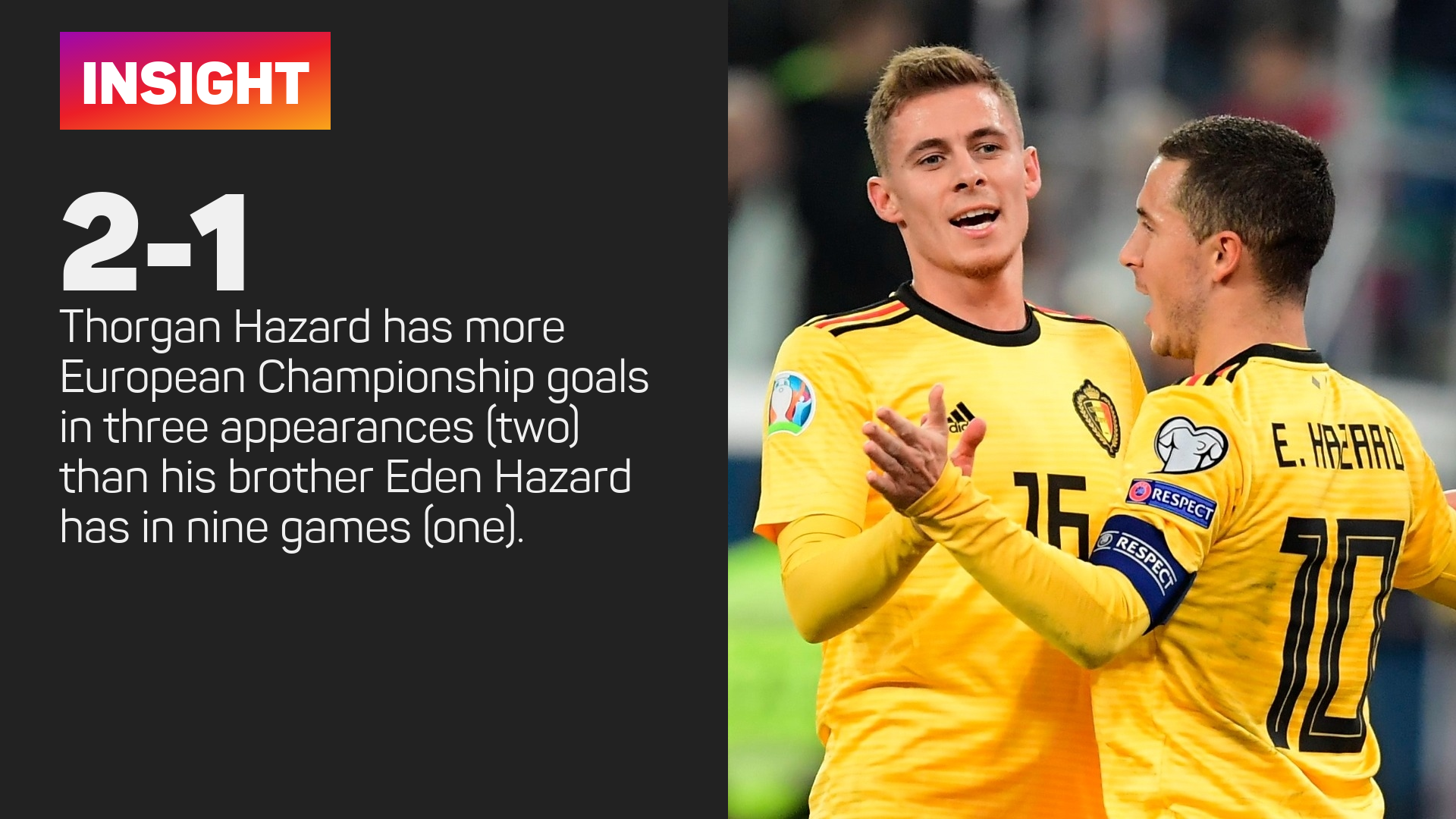 What does it mean? Belgium win but lose star power

Belgium showed little besides the moment of magic from Hazard, an unlikely hero alongside De Bruyne, brother Eden and Romelu Lukaku. It proved enough on this occasion.

But when facing Italy next, Martinez will hope to have De Bruyne and Eden Hazard available to make their own special contribution to the knockout rounds.

De Bruyne has created a tournament-high 10 chances in just 134 minutes, while Eden Hazard contested 19 duels and won four fouls in this match, providing a vital outlet for his side.

Thorgan Hazard's hit was one to remember, but he also played a key role in protecting Belgium's narrow lead.

The wing-back made five tackles, three clearances and also an interception when playing behind Eden.

It is surely a case of when not if Ronaldo reaches that magical number of 110, pulling clear of Iran great Ali Daei, but this was not his night.

Although five goals may still be enough to earn the Golden Boot, the forward scarcely looked like adding to that tally. He had four attempts but his best was a long-range free-kick.

Belgium head to Munich on Friday to face Italy, with Ronaldo and Portugal watching on from home.