After missing consecutive major tournaments, the Danish national team are eager to prove their international credentials at the 2018 FIFA World Cup in Russia.

In the final instalment of this three-part series, Kieran Pender went to Denmark to find out more about the Socceroos’ group C opponents.

From the top of Copenhagen’s Rundetaarn, a 17th century tower with views across the city, not one football pitch is in sight.

Space is at a premium in this compact city centre; large grassy expanses are absent.

Yet while it might not be visible, a love of the round ball game runs deep in Denmark – in the capital and beyond.

Football is the national sport and approximately five percent of Danes are members of a recreational football club, double that of the next most-popular physical activity.

“We are football mad,” says Bjarke Olsen, a local university student and target man for his seven-a-side team. “It is ingrained from childhood.”

De Rod-Hvide – the red and white – claimed the silver medal at the 1908 Olympics, the first time football had been an official inclusion within the Games.

For most of the following decade, Denmark was ranked among the best teams in the world.

As international football competitions became routine, success eluded the Danes. This was partly self-inflicted: the Danish Football Association excluded professionals from the national team until 1971. Why Peru could be Socceroos' biggest World Cup challenge

They were quick to make up for lost time. Denmark progressed to the round of 16 in its first-ever World Cup, in Mexico 1986, earning the label “Danish Dynamite”.

“What Denmark did was amazing,” Diego Maradona once explained. “They were like a bullet train.”

Generational change and internal disharmony saw the team struggle to maintain momentum, and Denmark failed to qualify for the 1992 European Championships in neighbouring Sweden.

But just 10 days before the tournament, the conflict in Yugoslavia saw Denmark given a late call-up in what would become the national team’s defining moment.

“You can write books about Denmark’s victory at Euro 1992,” exclaims Troels Henriksen, a sports editor with newspaper Jyllands-Posten.

“It stands as the undisputed greatest victory in all of Danish sports,” Henriksen adds.

Success reverberated beyond the football pitch, with the triumph coming just months after Denmark rejected full membership of the European Union.

“The victory became a nationalistic win about Danish independence,” he explains. 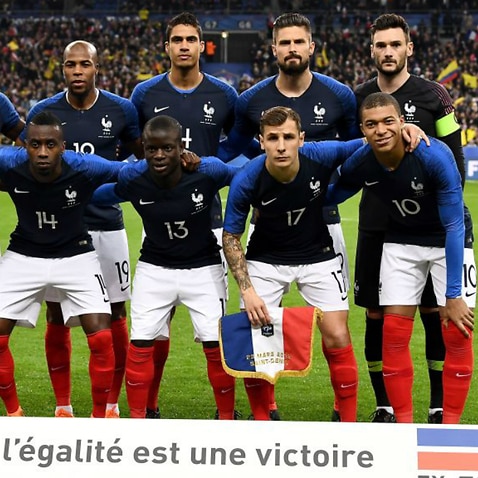 The view from Paris: ‘French supporters associate Australia with rugby, not football’

The country’s foreign minister, Uffe Ellemann Jensen, even wore a typical (and outlandish) Danish football hat to an important EU meeting on the day of the final.

While Denmark won the 1995 FIFA Confederations Cup and made the quarter-finals of the 1998 World Cup, the following two decades have otherwise been mediocre.

But the arrival of new coach Norwegian Age Hareide in 2015 has reinvigorated the team.

“Hareide has completely changed the way we play,” says Olsen. “Denmark is now emulating Klopp’s Liverpool-style possession football. It is dynamic and exciting – the passion is back.”

After finishing second in their qualification group behind Poland, Denmark romped to a 5-1 aggregate win over Ireland in the play-offs.

When the Socceroos take to the pitch against Denmark in Samara, all eyes will be on star Tottenham midfielder Christian Eriksen.

“Eriksen is our Cristiano Ronaldo,” offers Henriksen. “A different player but just as important for the team.

“A lot of Denmark’s tactics are made with the purpose of creating space for Eriksen in the opposition half. And it works!”

Henriksen compares the 26-year-old to Danish icon Michael Laudrup, regarded by some as the best footballer in Europe during the early 1990s.

“Eriksen is just as good as Laudrup was at his best and even more dangerous in front of the goal,” he suggests.

“You won’t find many more intelligent and technically brilliant footballers than Eriksen.”

But the current Danish team is more than just Eriksen. “Thomas Delaney is a modern box-to-box player and has had massive success in Germany,” says Claus Rondbjerg-Christensen, who runs a popular Twitter feed for English-language Danish football news.

“He has been incredible for his club [Werder Bremen], and also for Denmark during the qualifiers.”

“Sisto can open a can with his dribbling skills, and if he is on top form Denmark could be the same,” he says. “The winger could help give Eriksen some room – and vice versa.”

Heading to Russia with this talented squad, Copenhageners fancy their prospects against the Australian side that lost to neighbours Norway 4-1 in March.

“Australia is a lot of things to Danes,” explains Hanghoj.

“Australians are considered nice, humorous people, you gave us our future queen [Tasmanian-born Princess Mary], and we like visiting.

“But as a footballing country, Australia is viewed as one of the weakest teams at the World Cup,” he continues. “A Dane might be able to recognise Tim Cahill’s name, but that is it.”

The Danish team may lack World Cup experience, but they certainly are not short on confidence.

“The 1992 Euros win reaffirmed the belief that Denmark can compete with and even beat the best teams in the world on any given day,” says Henriksen.

“That might seem arrogant in a country with just five million inhabitants,” he suggests. “But it is a great asset at tournaments such as the World Cup.

“There is a strong belief that Denmark will go through from the group stage.”

If they do, it will likely be at the Socceroos’ expense.