In 2003 a wide-eyed 17-year-old Matt Derbyshire was snapped up Blackburn Rovers, taken from the relative obscurity of non-league football and thrown into the cut-throat world of the Premier League.

The teenager had to sink or swim in the bright lights of the professional game, but he found his feet at Ewood Park in no small part thanks to the support of Socceroos great Brett Emerton.

Derbyshire and Emerton spent six seasons as teammates at Blackburn, when the Riversiders were then flying high in the top flight under manager Mark Hughes.

The striker was just a young pro learning the ropes then but he says the help he received from Emerton, eight years his senior, was invaluable.

“I went in as a young player from non-league football and in a year and a half I was in the first-team,” Derbyshire told The World Game.

“Brett is a great boy, a really nice guy, a genuine guy. Most old professionals will look at young kids and won’t try and help them, but Brett was straight in and would help me.

“He knew I wanted to learn, to get better, he could see that. He really helped me out, and I got quite a lot of crosses off him, which was good. A fantastic guy and what a player he was as well.” Eighteen years later Derbyshire has landed in Australian football, playing for the A-League’s newest expansion club Macarthur FC, based in Emerton’s hometown. And the Englishman has the 42-year-old, and another former Blackburn link in fellow ‘Golden Generation’ member Vince Grella, to thank for his move down under.

“Brett was part of it, he introduced the club to me and said there’s going to be a club coming in in 2020, would you be interested coming down?” Derbyshire said.

“He put me on to the coach and Vince Grella did the deal, he got the deal over the line. Another player I played with at Blackburn. So he spoke to Ante [Milicic] and that was that done.”

Derbyshire has hit the ground running at Macarthur, banging in seven goals in 12 appearances. Only Melbourne City marksman Jamie Maclaren has scored more in the A-League so far this season.

“It was tough getting used to it at the start, going into a new country on the other side of the world after having such a long time off with the COVID pandemic,” he admitted.

“We had a long pre-season, which I wasn’t used to, but we’re finally getting something. We’re a new team so we’re having a lot of ups, and a few downs as well, but I suppose with any team you’re going to have that.

“It's always hard in pre-season, I try my best to get in the right positions. The service from the boys has been great at times, there are times at well where as players we could all be better. And I think that comes from relationships on the field. 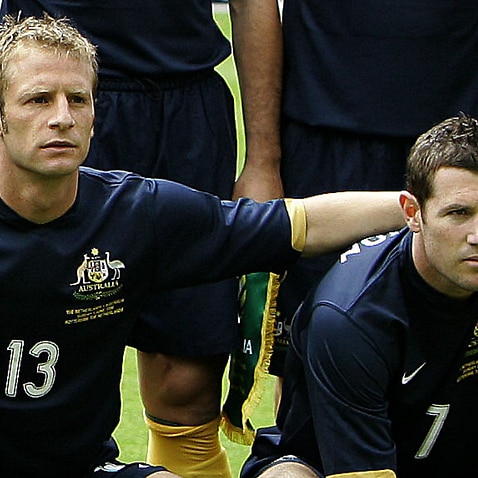 ‘I never get out of breath’ - ex-Blackburn boss on superhuman Emerton, luckless Grella

“20 brand-new players playing together, who haven’t played together before, is going to be difficult. But it’s going OK for now.”

As well as time in the Premier League, Championship and League One, Derbyshire has had spells in Greece with Olympiacos and in Cyprus with Omonia. But after four seasons in the Cypriot First Division the forward decided to try his hand in Australia.

“We were in Cyprus for four years and I think getting the kids settled – we loved the Mediterranean lifestyle in Cyprus and in Greece, and we thought where could we go that suited our lifestyle,” he explained.

“The language was good, the school for the kids, the sports… we visited Australia two years ago as my brother-in-law lives here and we thought wow this is it, this is the place to be. Two years after, we’re here.”

Derbyshire’s 19-year career has seen him play in the UEFA Champions League and Europa League, as well as earning 14 caps for England’s Under-21s. But he concedes he has been surprised by the standard of the A-League.

“It’s a good standard, I’m very surprised by the standard, there’s a lot of quality players in the A-League and good teams as well,” the 34-year-old said.

“It’s going to take some getting used to as people have asked me what it’s like and how do you describe it – I describe it as hectic. It’s just end to end, non-stop for 90 minutes solid.

“It doesn’t stop – in Europe you get the ball, you calm it down, you play it around the back and through midfield, whatever. Here it’s boom, boom, boom, it’s like a basketball game.

“But it’s enjoyable, and I’m sure the fans love it as well. It’s not enjoyable when you’re on the receiving end of having to chase back. But we’re all enjoying it at Macarthur, I’m enjoying playing, it’s going well.”

The striker will be 36 when his two-year deal expires at the Bulls in 2022. Derbyshire has aspirations of one day becoming a coach but is in no rush to retire, and believes Macarthur can do some damage in the A-League over the next 18 months.

“All we’re concentrating on is taking it game-by-game and literally day-by-day on the training ground,” he said.

“We’re trying to work on what we’re best at and how we can get better at that and take it into the game. We’re not looking up the table or thinking we can finish here – we all want to finish high, don’t get me wrong.

“But we’re a team… you can’t even say in a transition period as we’re a brand-new team, we’re setting our stall out and want to do as best we can this season and then build on it next season.

“I feel great, my body feels fantastic but that changes day by day. I’m sure any older player will tell you that. Fingers crossed my body will be fine and I want to try and play as much as I can.

“I love the game and I think once you stop loving the game and it’s getting a bit tedious for you then you need to have a look at the situation and say enough’s enough, instead of falling out of love with it and not enjoy it.

“That’s when you should hang your boots up. But no, I’m enjoying myself, my body feels good so I want to play as long as I can.”