Ansu Fati has made history at Barcelona in such a short space of time that even Lionel Messi's continued absence through injury has not been felt too keenly.

After making his debut at the age of 16 years and 298 days in the 5-2 defeat of Real Betis in August, he became Barca's youngest La Liga goalscorer after coming on to score in the 2-2 draw at Osasuna a week later.

With Messi still not ready to be risked and Ousmane Dembele also sidelined, Ernesto Valverde made the bold call of handing Fati his full debut in Saturday's 5-2 win over Valencia at Camp Nou.

He needed just seven minutes to prove his coach right.

Inside two minutes, Fati turned in Frenkie de Jong's cross to put Barca ahead, and he returned the favour to his team-mate five minutes later after a brilliant run from the left, becoming the youngest LaLiga player this century to score and assist a goal in the same game.

He came close to scoring twice more in the first half from that same position, as he turned and squared up fearlessly against full-back Daniel Wass at every opportunity. 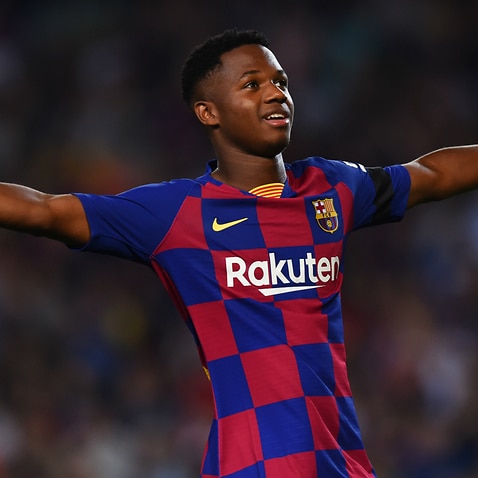 One impudent flick over his own head in the Valencia box brought gasps from the home fans.

Little wonder Barca Under-19 boss Victor Valdes described him as "the jewel of La Masia",  a player who produces "pure anarchy".

With the FIFA Under-17 World Cup coming up next month, little wonder, either, that Spain are desperate to sign him up.

Born in Guinea-Bissau and eligible for both them and Portugal, Fati moved to Spain with his family as a child and joined Sevilla's academy before accepting an offer to sign for Barca as a 10-year-old, after his father turned down a more lucrative approach from Real Madrid. According to Catalan daily Sport, Fati has declared his intention to play for his adopted country and national team head coach Robert Moreno says efforts from the Royal Spanish Football Federation (RFEF) to bring him into La Roja's fold are well underway.

"The people of the federation are working on it in order to bring Ansu Fati in, and then there will be the decision of the player," he told Movistar at half-time of Saturday's game.

"The federation works to have the best players. It's a joy for Barca – a player who has come out of La Masia. You have to be calm and I hope he is."

Fati certainly seems someone unlikely to let his sudden fame get the better of him. He described his debut last month as "the dream of any boy at La Masia"; a moment when a young man who does not turn 17 until October 31 got to play alongside global stars and was rewarded with a hug from a beaming Messi.

His natural talent even seemed to have escaped his father, who told Partidazo de Cope last month: "At six or seven, he came to Spain. I had come here before and I didn't know he played football.

"They told me I was not aware of how good my son was and that he was dribbling by everybody." 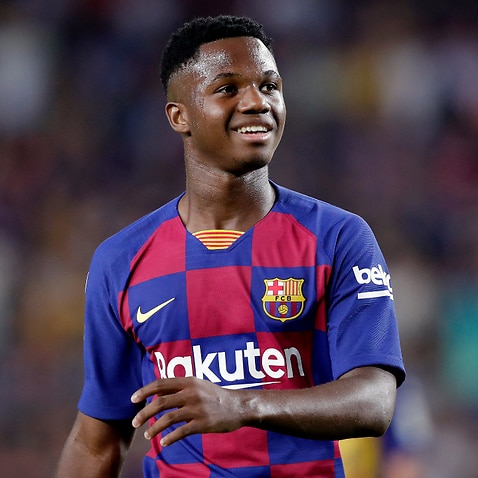 When Fati was brought on to replace Carles Perez against Betis and became the second-youngest player to feature in La Liga in the club's history behind Vicente Martinez, his father described it as "the happiest moment of my life". He had barely even believed it when he learned his son had been given a first-team call-up.

Playing for the club's Juvenil A side, Fati's main goal prior to the start of the season was to make some headway in the Barca B reckoning.

Valdes even had to take him to buy new boots as his old ones were hurting his feet.

In less than a month, he has played three senior matches, scored two goals and set up another, broken club and division records and started a scramble from national team bosses eager to make sure he does not slip through the net.

"Remember the name, Ansu Fati, as more records are bound to fall," Barca said on their official website after the Valencia rout.

They almost certainly will. For now, though, he'll rest and then get back to training to prepare for Borussia Dortmund next week.

He might need a lift – he won't be old enough to drive for another 13 months.