Tim Cahill's Socceroos swansong has been a mere after-thought for Graham Arnold as he prepares to gather invaluable intelligence ahead of Australia's AFC Asian Cup defence.

The coach will tinker with his line-up for the Socceroos' international with Lebanon on Tuesday night in the absence of regulars Tom Rogic (knee) and Robbie Kruse (groin).

Arnold said Cahill's five-minute cameo before home fans at ANZ Stadium was a "just reward for a great career" but his focus was elsewhere.

"The first 85 minutes is all about our performance," Arnold said. Cahill backs Socceroos striker to emerge ahead of Asian Cup

Fringe Socceroos could go a long way to earning a ticket to the UAE, with Arnold yet to settle on the side he'll take to defend Australia's 2015 title early next year.

"There's still half a dozen positions up for grabs," he said.

"Tomorrow night is an opportunity for those players to show not only myself but the country that they're hungry, they're there and they want selection for the Asian Cup."

Speedy winger Awer Mabil shapes as a likely first-time starter after his spark-plug performance off the bench in Australia's 1-1 draw against South Korea in Brisbane on Saturday.

"It's a great opportunity for me to look at other players," Arnold said.

"The boys who started against South Korea were excellent. There'll be some that played in that game that start. Others will be given a great opportunity."

Mabil, who has also impressed at club level for Danish side Midtjylland, wasn't fussed how Arnold deployed him as long as his en-route mother got to watch him play at ANZ Stadium at some point.

"I'm excited for my mum to come and whether I start or I don't start, I am prepared," said the 23-year-old on Monday. 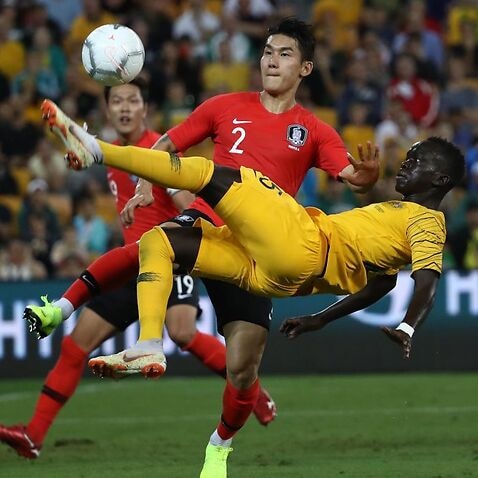 Arnold was to cut a squad member after Monday afternoon's training session but believed A-League stars Rhyan Grant and Craig Goodwin provide plenty for him to ponder.

"Craig gives us something totally different tactically - and that's a left-footer, left winger who can play high and wide," he said.

"Rhyan Grant gives us another option to look at, at right fullback in a similar mould to Joshy Risdon."

Arnold also launched an impassioned defence of striker Jamie Maclaren after he copped flak for managing just four touches and no shots in his 70 minutes at Suncorp Stadium.

"He did a fantastic job. He worked extremely hard for the team," Arnold said.

"You might say he didn't touch the ball much but if you look at what he did pressing the opposition.

"They turned over the ball because of him and ... on four or five occasions we nearly scored from it."