The official FIFA World Cup ball has become the game's most iconic piece of equipment. Here we look back at the history of the World Cup ball. For its first FIFA World Cup, adidas created the world's most recognised football design. It featured 32 hand-stitched panels (12 black pentagons and 20 white hexagons) that made the ball a more perfect sphere and visible on black and white television for a worldwide audience. To this day, the design remains the football archetype. 1974 adidas Telstar durlast
Supplied adidas
Two match balls were used in 1974 – adidas Telstar was updated with new black branding replacing the gold branding and a new all-white version of Telstar named adidas Chile was introduced. 1974 was also the first time World Cup Match Balls could carry names and logos – adidas was no longer an anonymous supplier of match balls used on the field. The 1978 Match Ball included twenty panels with triads that created an optical impression of 12 identical circles. The Tango inspired the match ball design for the following five World Cup tournaments. The 1986 World Cup match ball revolutionised footballs and production techniques as the first ever fully synthetic/polyurethane-coated match ball. The new materials increased durability and further minimised water absorption. The ball was also the first to include designs inspired by the host nation. The Azteca was elegantly decorated with designs inspired by Mexico's Aztec architecture and murals. For the first time, the World Cup match ball contained an internal layer of black polyurethane foam, making it fully water-resistant and faster than ever. The name and design paid homage to Italy's history and the fine art of the Etruscans. 1994 adidas Questra
Supplied adidas
For the 1994 World Cup, the Questra was first ever match ball to be enveloped in a layer of polystyrene foam. The innovation made the ball softer to the touch and much faster off the foot. The ball's design represents space technology, high velocity rockets and America's "quest for the stars." 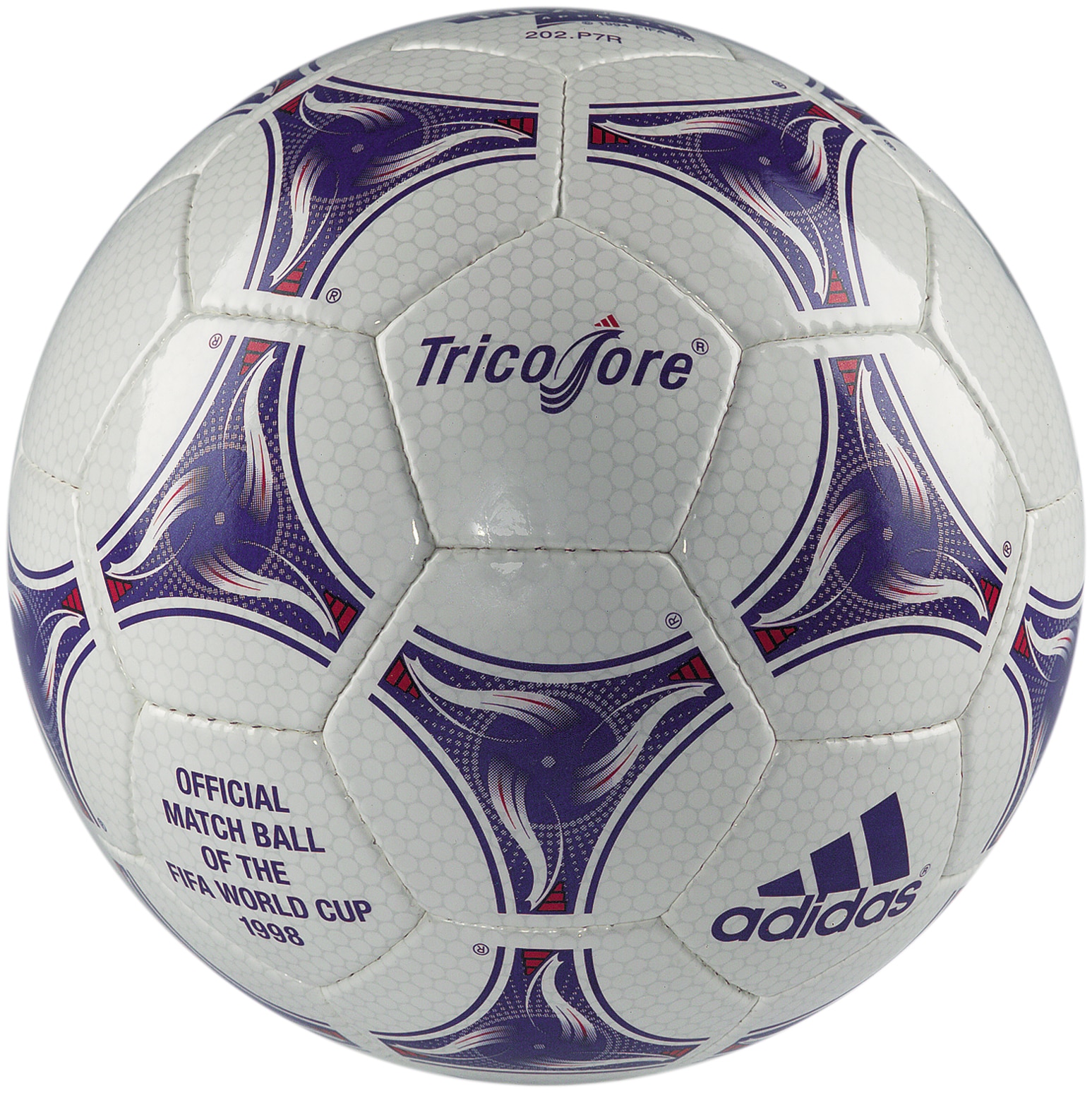 1998 adidas Tricolore France
Supplied adidas
The first ever multi-colored match ball, the Tricolore featured an advanced syntactic foam that improved the ball's durability, energy return and responsiveness. adidas also used an under glass print technology for the first time that increased the longevity and visibility of the ball, which featured France's national colors. A radically new configuration reduced the amount of panel touch points forming a smooth and perfectly round exterior that improved accuracy and control. Prior to the Teamgeist, the surface of World Cup match balls had notable differences depending on where a player would strike the ball due to seams, ridges and other imperfections where panels come together. The revolutionary propeller design of the Teamgeist minimised corners and created a smoother surface for improved play. The ball was designed with traditional colours of the German flag and was accentuated with the golden colour of the World Cup trophy. 2010 adidas Jabulani
Supplied adidas
The Jabulani featured a new grip n groove ball technology that provided players a ball with exceptionally stable flight and perfect grip under all conditions. With eight thermally bonded 3-D panels that were spherically molded for the first time, the Jabulani was more round and accurate than any of its predecessors. adidas provided the official match ball for their 12th straight FIFA World Cup in 2014 as Brazuca was unveiled on December 3, 2013. Brazuca was confirmed as the match ball name after a public vote in Brazil, participated in by more than one million football fans in the host country.