TWG's Asian expert runs his eye over the changing face of football in China as the yuan flows and the threat to Australia's Asian club champion reaches an even greater level.

Chinese football history is littered with grandiose club names and ideals - fleeting vapours often of the industrial machine - and sides that have tasted regional or national success and then evanesced as the workforce changed or disappeared.

In 1955, the 1st Ministry Machine Building club topped the championship standings, a much better performance than the Changchun Tractor Factory turned in a decade later while Tianjin Crane Factory propped up the table 18 months before the Cultural Revolution halted league play for four long years.

There has been a Red Flag, a Beijing Bus, the Shandong Containers and Meixian Cigarette Factory sides, a White Workers team and more army units than you could poke a MAG-58 at.

Even 'Tibet' had a side for several seasons in the mid-1970s.

Modern Chinese football is more of a mirror held towards the real estate giants that are propelling one of history's largest construction booms and pocketing sums so vast in return that owning a sporting club becomes something to do with the spare change.

Greenland, R&F, Renhe, Ever Bright, Yatai and Greentown are just some of the development giants that have changed the face of Chinese football.

Western Sydney Wanderers' ACL opponent on Wednesday evening though is the club that was at the forefront of the recent explosion in spending – and success – and continuing with the lengthy club names arrives with a newly minted title.

That the purchaser Alibaba Group - China's leading e-commerce company - was involved took some by surprise but the manner in which the transaction eventuated raised even more eyebrows.

Reuters reported Xu as saying that he and Alibaba founder Jack Ma had something of a wild dinner recently where the deal was done in double time.

"I got Jack drunk in Hong Kong and afterwards asked him if he'd invest and he said OK," Xu was quoted to have said.

"The discussions were finished in 15 minutes."

Not only is that a hell of a business deal, it's also a monster-sized hangover to nurse the next morning.

For a team whose fans have been drinking in success over the past few years it's yet another signal that the team they support remains the leading kid on an increasingly crowded block.

Relegated in 2010 on the back of a match-fixing scandal, Guangzhou went on to win the Super League title every year since 2011 and, with the 2013 ACL trophy also in the bag, it is the undisputed king of Chinese football.

To reach and maintain that perch though has not been cheap. Year on year the club has splashed ever increasing sums to lure the best local and a handful of exceptional foreign talents to the south of the country.

The club provided seven members of China’s Asian Cup squad and in the current off-season spent $15.7 million to bring Brazilian Alan from Red Bull Salzburg and another $21.4 million for one of Brazil's brightest young stars in Ricardo Goulart.

There's a clear shift in mentality with the focus now on younger talent on the way up - Goulart has already been capped by the Selecao - rather than a last pay day for the washed up Euro brigade.

It's also a firm sign that China has now overtaken the Middle Eastern markets of the UAE and Qatar as the economic sirens wail and the talent floodlights sweep across Asia.

Guangzhou's cash helped propel the total Chinese spending in the 'winter' transfer window to some $140 million which was, remarkably, second only to the English Premier League on a global scale according to figures compiled by a German agency.

Add to this the fact that CSL clubs receive only a token amount of money from TV revenue and the impact of wealthy owners becomes clearer.

Indeed, so ambitious is Guangzhou that it is aiming to become the first club to issue an initial public offering, hopefully within the next five years.

This evening though none of that matters as it will be 11 v 11 at Parramatta against a Wanderers outfit that seems to have bottled the secret of success in Asia. 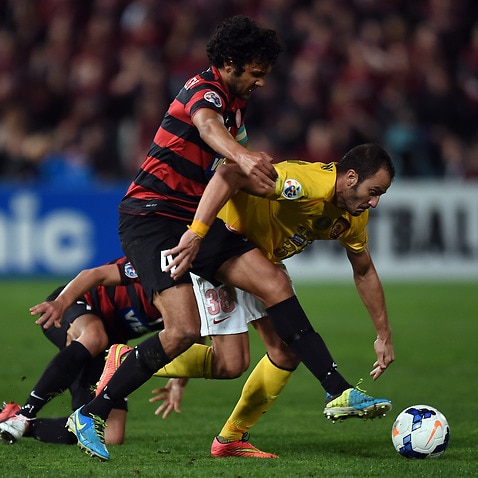 While Tony Popovic will once again shuffle his deck, new Guangzhou boss Fabio Cannavaro is set to roll out what appears to be his strongest line-up in a shape, if not style, which may be unfamiliar even to those who have followed the club’s recent fortunes closely.

In a 4-2-4 formation the backline will be missing key defender Zhang Linpeng through injury but the central partnership of Feng Xiaoting and Kim Young-gwon is one of the best in Asia and the full-backs (most probably Mei Feng and Li Xuepeng) also provide excellent cover and thrust going forward.

The midfield pair will comprise captain Zheng Zhi and Huang Bowen while Yu Hanchao will join the clubs Brazilian imports (Goulart and newly re-signed Elkeson) in a four-pronged frontline that has been shorn of Alan's services.

For the Wanderers to nullify the visiting side's potency they must try and force Guangzhou either long or wide, and stop the service to the feet of the attacking quartet – if they fail to do so things could get uglier than Saturday’s derby.

More than 4,000 Chinese fans are expected to attend and combined with the fierce backing of the Red & Black faithful it should be another fantastic evening at Wanderland.