Dr. Craig Duncan, who was Head of Sport Science at FFA from 2014 to 2018 and worked with the Socceroos during their Asian Cup triumph in 2015, spoke to Nick Stoll about the dos and don’ts of warming up for football matches.

This month, hundreds of thousands of players returned to football fields across Australia, with the exception of Victoria.

Whether it be at a local park or an indoor court, almost all of them would have been ‘warming up’ incorrectly.

Anyone who plays amateur football knows that the warm-up can vary, depending on who is organising the team, from a full 30-minute session that leaves you so tired you’ll be asking to start off, to a couple of shots at the keeper and few jumps in the air.

Neither end of the spectrum is good.

With such a long break, there’s a high chance that players will suffer injuries, especially at the amateur levels.

Dr. Duncan, explains the dos and don'ts, what to do if you arrive 10 minutes before kick-off, and how it changes from the amateur level to the professional level.

What is the actual goal of ‘warming up’ - what are we trying to achieve?

How should you be warming up for ‘park football’?

The warm-up process should be 15 to 20 minutes. We want to start with about five to seven minutes of active work.

Get in either a single or double file lines and do some of the warm-up exercises shown in the FIFA 11+ videos.

As you’re doing this over the five to seven minutes you want to increase the intensity of your runs.

Then we can do some dynamic stretching. Research has shown static stretching - which is standing and stretching one muscle at a time - we try and stay away from that.

But if you've always done that, I've got no issue with you doing it. I always say to players if you feel you need to (static) stretch something, then do so. Just focus on whatever muscle feels tight.

Then for the last five minutes, you want to do something like a five-on-five possession activity against each other.

Once the warm-up is over, you want the time between that and the actual match to be about 10 mins.

We’ve all done it - what should you do if you’re late and turn up 10 mins before kick-off?

What you want to do then is just that first ten minutes of the warm up - without the ball. The running up and back, swinging your legs through, running backwards, running laterally.

The warm-up is preparation. It’s preparing the mind and body to play. Even if you’re just there to have fun. The warm-up can help you clear your mind and will allow you to enjoy the game more.

Should you adjust the warm up if players have lower levels of fitness or if it’s very hot?

Yes, absolutely. It’s got to be specific to the individual. 10 to 15 minutes might be great for you (as opposed to 20). Even with the pros we adjust the warm-up if it’s very hot. 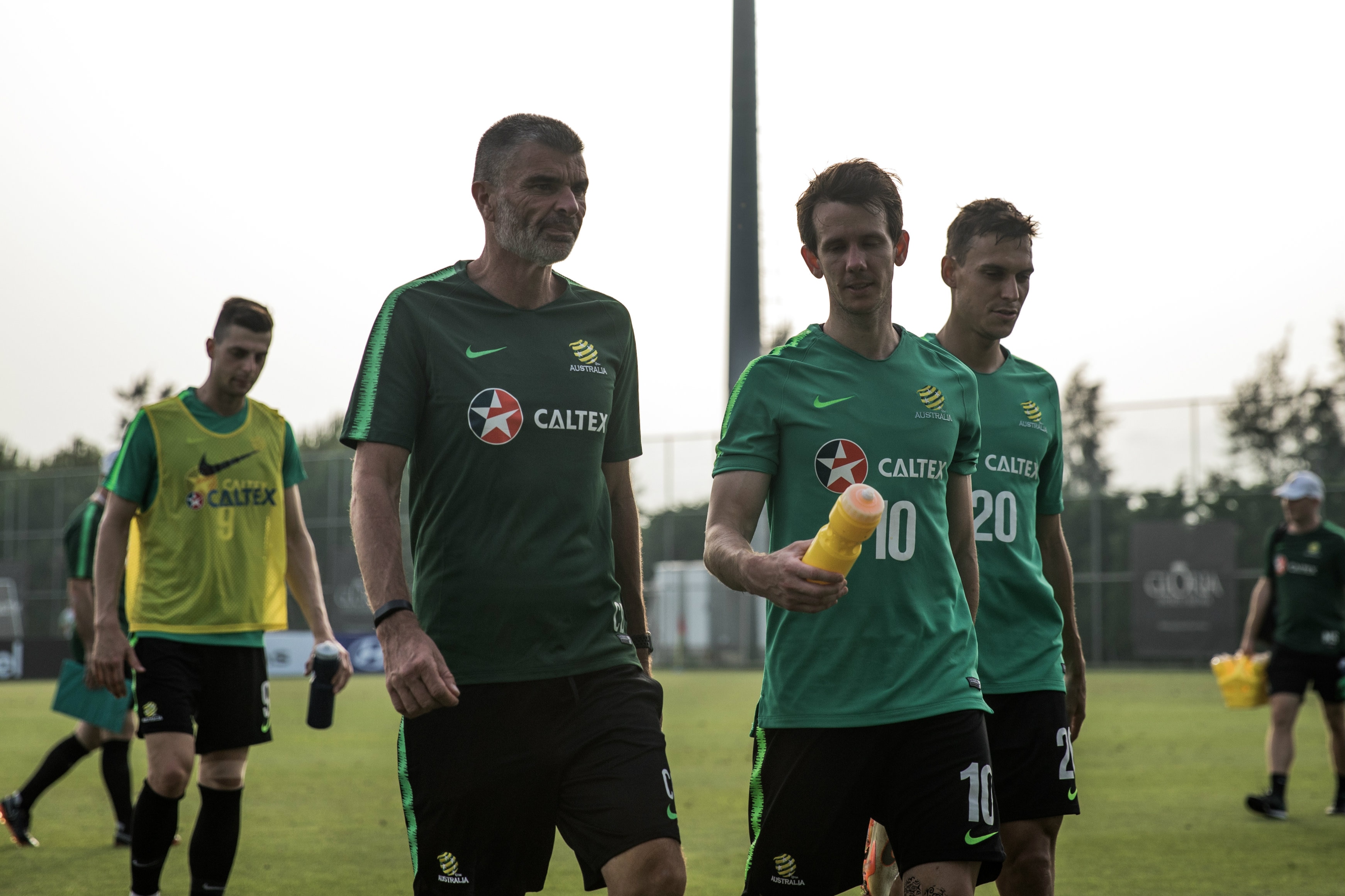 Dr Craig Duncan with Robbie Kruse in camp for the Socceroos

Should different type of players warm-up in different ways? Should a passing midfielder warm-up in the same way as an over-lapping wing-back?

Absolutely. There needs to be time for that individualisation. Often, professional teams I work with, for the first few minutes of the warm-up the players just do their own thing, then we get into those dynamic exercises to get the body warm (forwards running, backwards running, lateral running) increasing the intensity.

Then we go into a possession-based drill. Just to get their feet on the ball, the intensity, change of direction and sharp movement.

And then there should be a period for around five minutes or so when they go off with their own area.

So the midfield players, you should see them playing some longer balls and starting to warm up like that.

Centre defenders might be doing some headers and practicing that, the wingers or full backs or the wing-backs also doing their own thing and getting some longer sprints in.

Football is a very different physiological and technical game depending on what position you play.

Players really have to know themselves and become a good ‘self-scientist’ and know what they need to do to get themselves to a maximum.

If you see everyone doing the same thing, I would question if that is right.

You’re talking about an outlier there, a sensational player, so he can say it. The problem becomes when everyone thinks they’re Pirlo. He’s a unique player. People say ‘Messi does this’ - again, he’s an outlier.

But if he’s performing then it’s ok. If he stops performing at a high level or he gets injured then it might be time for a change.

If I’m working with a player of that level, and with that career, then I’m going to work with them for what’s right for them.

If he performs at his best, then the job is done, who cares if it’s ‘best practice’ - it’s best practice for that player.

Do different nations warm up in different ways? And who is doing it the best?

There’s some great footage at World Cups where they look at different cultures warming up. It’s very, very different.

Australian and German teams might be very structured. African teams are much more flowing. Brazilian teams warm up all in rhythm. So there is a cultural influence.

It all goes back to performance and what is working.

What about eating before the game? Is there anything you should or shouldn’t do?

If you’re really full when you are about to play it’s very difficult, because the blood is going into digestion rather than into the muscles to help us be active.

But if we’re talking park football, if you’ve worked all day and have to play or train at night, a bit of preparation can help.

A bit of trial and error is good. Ask yourself, did I have enough energy when I was playing today? If the answer is yes continue what you’re doing. If the answer is no we can look at what is happening.

In a professional team, if you’re playing at 7pm there would be a pre-match meal a couple of hours before. People are not going to eat a major meal within three hours of a match.

It’s common sense though, you can’t be too full but you can’t also be too depleted because then you won’t have enough energy.

What you would do is have your breakfast, have your lunch - say you have it around 2pm, then you would have a smaller sized dinner around 5-5:30pm, then you play at 8 and when you come home you can make a decision then if you just have something small.

What you don’t want to do is be having a massive bowl of pasta at 6:30pm.

How much has it changed over years? Tactics have changed so much over the years in football, technology has changed, has that been the case for sports science and warming up?

Injury prevention work has changed. Probably the biggest change was there used to be a lot of static stretching before a game for a long period of time. Research came out and said ‘that’s not going to help the situation’. Although I haven’t completely ruled it out, I’ll give people a minute or so to have a static stretch almost to make a player feel comfortable because they might have always done it.

You’ll still see people now doing two or three laps around the pitch, stretch and then get into training.

We still let (professionals) do maybe a lap around the pitch, but that’s more for them to have a conversation and just to get a start before you get into it.

The biggest change would be the implementation of injury prevention work and the change from static stretching to dynamic stretching.

Have you ever seen a local park team warming up, and think ‘what are they doing?’

I try not to be too judgemental.

I suppose what I see more is the ‘cool down’, and young teams being put through this ‘cool down’ and then this talk by the coach when it’s just park football. You think come on, just let them go have a sausage sizzle.

How important is the ‘cool down’?

It’s not as important as we think.

You might get them together just to have a little stretch and a brief conversation about the game.

What’s most important about the ‘cool down’ is it’s the start of recovery for the next game. So you want to get some good food into you and some good sleep.

With park football, particularly with kids, you just want to make it enjoyable. Going through these procedures maybe isn’t doing that.

I did see this local coach talking to these 10-year-olds for what seemed like forever. After a few minutes they’re switched off and they’re thinking about what they can get from the canteen, so let them be.

Are there any myths you want to bust? Or any big dos or don'ts?

In respect to recovery, people are into ice baths and compression garments. They’re the cream on the cake, there is research to say they work, but there is no point in having these things if you’re not sleeping and eating well.

I talked to a friend of mine and asked what his local team did. He said, ‘we pass the ball in a circle for five minutes then all of us just take shots at the keeper for some reason’.

Yeah the shots at the goalkeeper is an interesting one. I see this even with pro teams. I do think to myself sometimes, ‘why are they shooting when they are never going to shoot from there in a game?’. There should only be certain players doing that.

Do we need to be extra careful right now with so many people coming back after not exercising for a while?

The injury potential now is very high. Everyone is excited to be back playing. We have to be careful.