Australian coach Matt Ross has one of the toughest jobs in world football – he must help wake up the sport’s biggest sleeping giant.

In November, the Newcastle native was appointed head coach of the China Under 15 Girls’ national team. Ross was recruited from Vittsjö GIK – the Swedish women’s side where he was head coach – under a drive to return women’s football in China to the golden age of past decades.

China, which lost the final of the 1999 Women’s World Cup on penalties, is currently ranked the 16th best team in the world.

But under President Xi Jinping, a keen football fan, the Chinese Government is investing heavily in football. The plan is to become a “world football superpower” by 2050.

“They see women's football as a faster way to get to the top. They are putting big investment into girls’ football and women’s football,” Ross tells The World Game.

“There is a goal for 100 foreign coaches to come to China and help improve the knowledge and level here. Roger Reijners, the former coach of the Netherlands Women’s side, is in charge of the Under 16 Girls’ team and Angel Villacampa Carrasco, who coached Atlético Madrid women’s team, has the Under 14s.

“So they've got some really highly credentialed, experienced coaches to come to the girls' game.”

Reporting to FIFA’s joint Female Player of the Century, Sun Wen, Ross has had to confront the challenges of identifying and nurturing the brightest teenage talents in the world’s most populous nation.

Travelling extensively across the vast country, Ross must select an elite group to be based at a new academy-style training camp in Chengdu. Matt Ross with his China U-15 coaching staff
Supplied

“Chinese national tournaments are huge events held for three to four weeks, where up to 18 representative teams play every other day,” Ross says.

“My coaching team and I had a clipboard each and we walked around watching players. We would meet every night and would have whiteboards full of information, trying to whittle this few hundred down to 42 for the next training camp. A few months later it was the same thing in a different city.”

Such a talent pool to dip into is an unimaginable luxury compared to Ross’ first foray into international coaching.

Previously an assistant referee in Australia’s National Soccer League – where he came face-to-face with coaches like Ange Postecoglou and Graham Arnold – Ross was appointed by the British Virgin Islands Women’s Under 20 Olympic side.

“There were no players, no team, no money and no league. I coached a total of zero sessions, and, on a deal where I was being paid by the session, left the country after four months,” Ross says.

Back in Australia, he gained experience and found success coaching youth teams in the Northern Territory before leaving in 2012 to follow his dream of making it in Europe.

In Germany, he worked as a video analyst for 1. FFC Frankfurt and was part of the backroom team as the club won the Women’s Champions League in 2015. The following season, after impressing on a temporary basis, Ross was appointed head coach of the European champions.

“Coaching in the Champions League was an experience I’d never thought would happen,” he says.

Now in his first full international role, Ross must focus not only on unearthing and improving the next generation of Chinese players, but also sharing his knowledge with local coaches.

“The players are brilliant to coach and very keen to learn and improve. Technically they are comparable to European girls of the same age, however, match intelligence and tactical awareness are major areas for improvement,” Ross says.

“I'm not looking for polished players yet because there aren't that many around, so it's more about the right mentality to play football. For example, there are a lot of technically good players who are quite small. But a lot of the local coaches want players who are big, fast and strong.

“Over the last few months we've taken on the players that I think have the potential to be elite players, not just the ones scoring eight goals a game because they're a foot taller than everyone else. 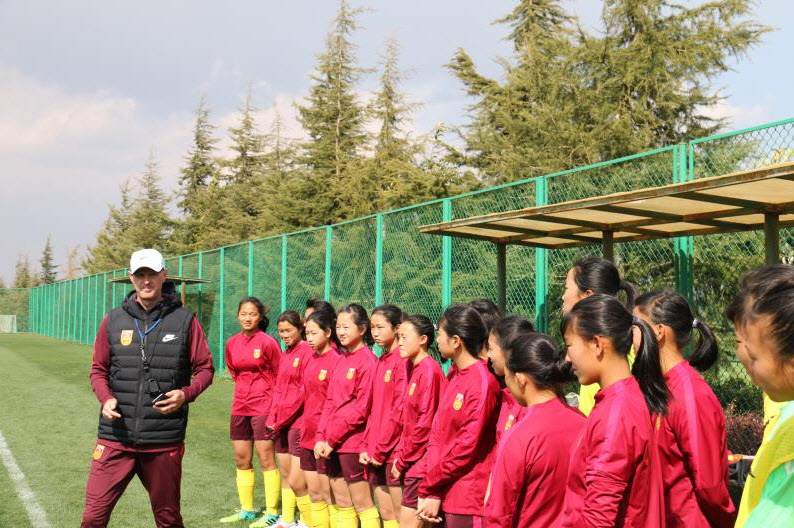 Matt Ross with the U-15 Girls Chinese side
Supplied

“It's also been my job to talk to the hierarchy and say ‘if we want China to have success in the long term, you have to tell these coaches not to worry about results in the short term, but to develop players’.”

After swapping a town of 1,700 in the Swedish countryside for Chengdu, a city of 7.8 million, Ross oversees his squad in a state-of-the-art complex where the players live, study and train.

The team’s first big test will be the East Asian Championships in August, but Ross is thinking further ahead.

“Like all development projects, you're not going to see the real results for two, three or five years when we see some of these players as part of the Under 20s, or two or three who have broken into the senior national team,” he says.

“The discussions I've had with the FA, they know they need a longer-term commitment. If this is going to work it can't just be getting a foreign coach for a year and spitting them out and getting a new one, you need some continuity.

“I'm also showing my commitment. I'm learning Mandarin every day, I'm communicating with the administrators and I'm showing I'm not just here for one year to then move on.”

While it is still early in his project, Ross has seen enough raw talent on the pitch and enough desire off it, to believe China’s football dream could become reality.

“You only have to look at how the country has changed in the past 10 or 15 years,” he says.

“Once they set their mind to something, they can achieve it.”