Gareth Bale is back, Harry Kane and Son Heung-min never went away and Dele Alli has also returned to the first-team picture.

It leaves a tantalising question: will Jose Mourinho be tempted to unleash a front four of Bale, Kane, Son and Alli in Sunday's north London derby against Arsenal at Emirates Stadium?

He did just that for an all-capital clash with Fulham earlier this month, with the quartet in tandem for 67 minutes of a 1-0 win before Bale and Alli made way for Moussa Sissoko and Lucas Moura.

That accounts for more than half of the 114 minutes they have spent together on the field in total since Bale arrived back at Spurs on loan from Real Madrid.

The Wales star's struggles for match fitness and a prolonged period in the cold for Alli do much to explain such fleeting glances at the foursome but, with local pride and Champions League qualification on the line, it might be time for Mourinho to roll the dice.

There is little doubt the latest round of clamour for Spurs' fantasy forward line is down to Bale's emphatic return to form.

After his brace in the 4-1 win over Crystal Palace last weekend, Bale had six goals and three assists in his past six outings in all competitions, giving him a goal involvement every 37.7 minutes.

In the 16 games prior to that he had four goals and no assists, amounting to 200.8 minutes per goal involvement.

Another of the qualities most associated with peak Bale also appears to be in good order, with the winger averaging 4.7 dribbles per 90 minutes this season. In each of the past three campaigns at Madrid he averaged below three per game.

His touches per 90 (60.4) are above 60 for the first time during the same period and, heading into a showdown with the team he has scored against more than any other in the Premier League (five in 10 versus Arsenal), Bale unquestionably looks to be in the mood. 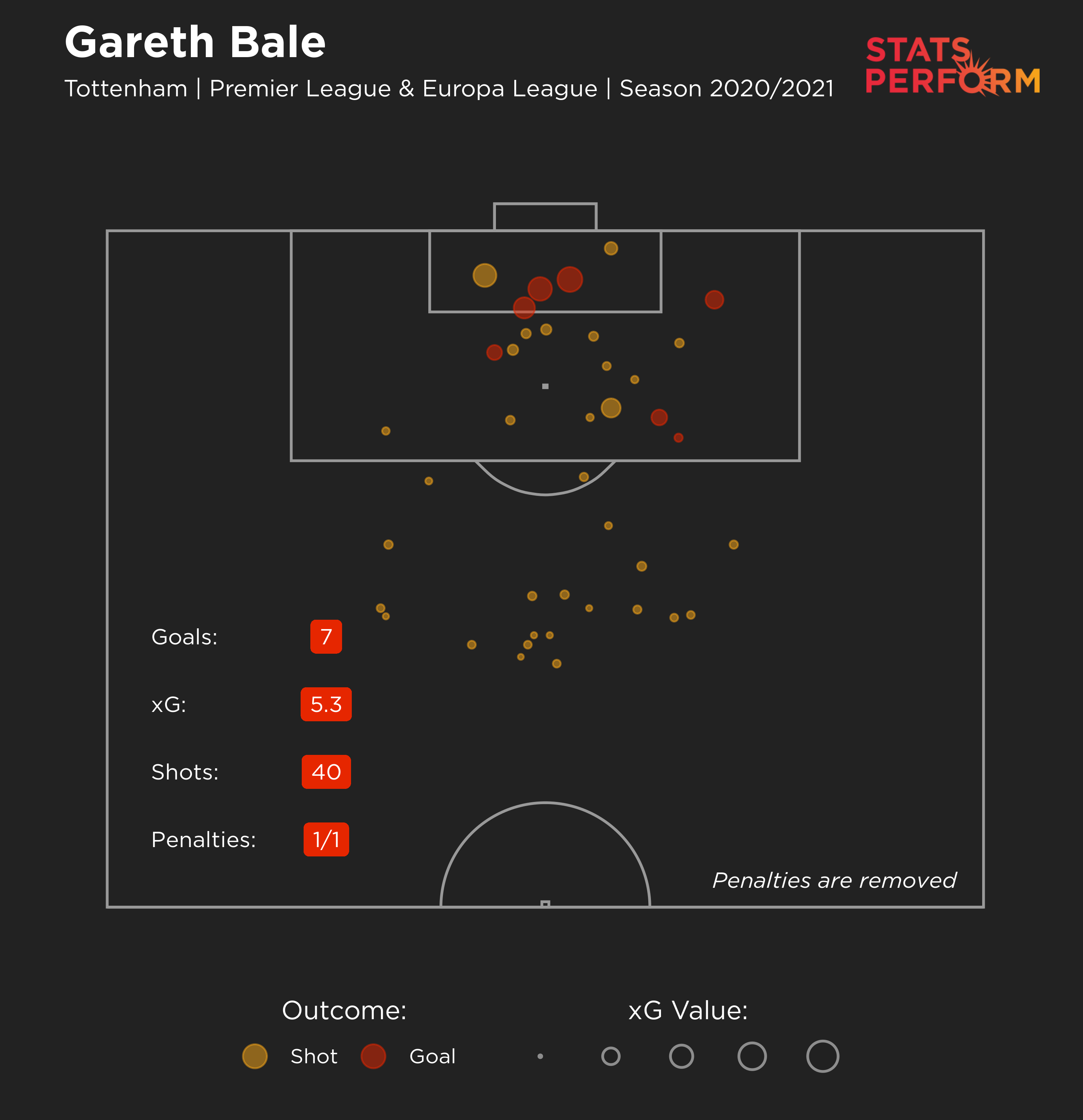 England captain Kane is in contention for the third Premier League Golden Boot of his career, sitting one behind the division's top scorer Mohamed Salah on 16.

Son is the joint-fourth top scorer on 13 and each man's respective assist tallies of 13 and nine underline how vital they are to Spurs as an attacking force.

The Kane-Son combination has yielded 34 goals altogether – the second-most in Premier League history.

This season alone they have combined directly for 14 goals, including when each man scored in Tottenham's 2-0 derby win over Arsenal in December.

Mourinho was confident Kane would overcome a knee complaint sustained during the closing stages of Thursday's 2-0 win over Dinamo Zagreb, a game where the striker netted both goals.

Under the Portuguese tactician, Tottenham's win percentage with Kane in the team is 53.5 across 43 matches and drops to 30 per cent from 10 when he is unavailable.

Kane and Son are Spurs' sure thing, a status the rejuvenated Bale once enjoyed. Not too long ago, the thought of them facing Arsenal without Alli would have been implausible, but there is a man working relentlessly to make more attacking line-ups a possibility for the innately cautious Mourinho. 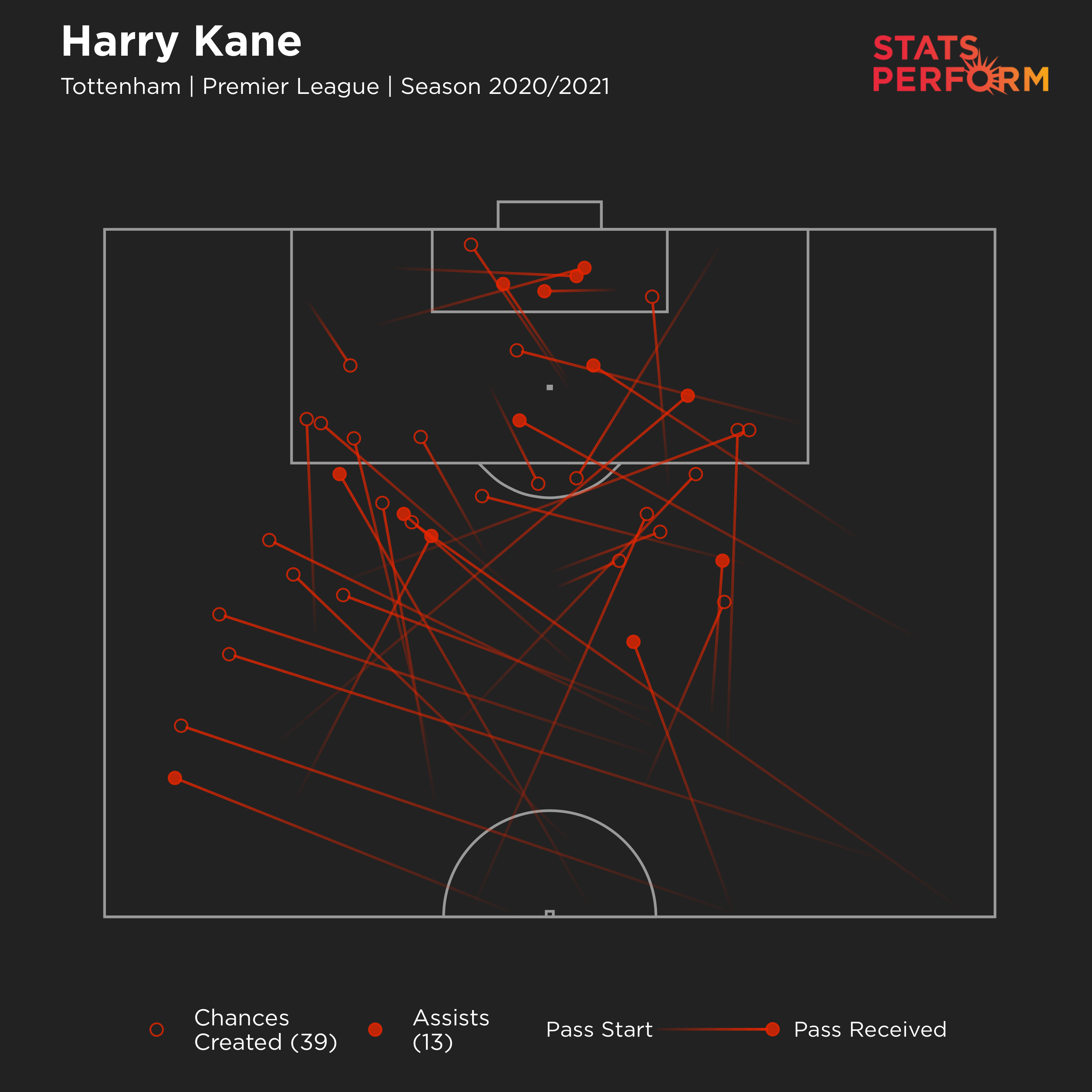 For both the raucous 6-1 win at Manchester United early in the season and the clinical 2-0 home victory against Manchester City that sent Spurs top of the table in November, Spurs' back four were protected by a rock-solid midfield screen.

During the latter match, Sissoko and Pierre-Emile Hojbjerg were relentlessly dogged, with Tanguy N'Dombele enjoying a little more license.

Recently, Mourinho has loosened the shackles slightly, with the creative N'Dombele dropping deeper in his 4-2-3-1 to allow a genuinely four-pronged attack.

Hojbjerg's superb form and ever-productive performances have made this and the prospect of a Kane-Son-Bale-Alli configuration possible.

The Denmark international has made more interceptions (54), recoveries (329) and tackles (89) than any Spurs player across all competitions this season.

He is the only Premier League player to have made more than 300 recoveries and is second only to Manchester United defender Aaron Wan-Bissaka (104) in terms of tackles for those operating in England's top division.

Hojbjerg's high number of recoveries is a huge contributing factor to him starting 355 open play sequences in the Premier League for Spurs this season – the third-best of any player in the league.

But the 25-year-old is not just a destroyer. Only Manchester City's Rodri (20) has supplied a shot more often at the end of a period of possession he started than Hojbjerg's 15, of which he has scored two.

His involvement in 16 build-up sequences leading to goals is another area where Hojbjerg is the best in the division. 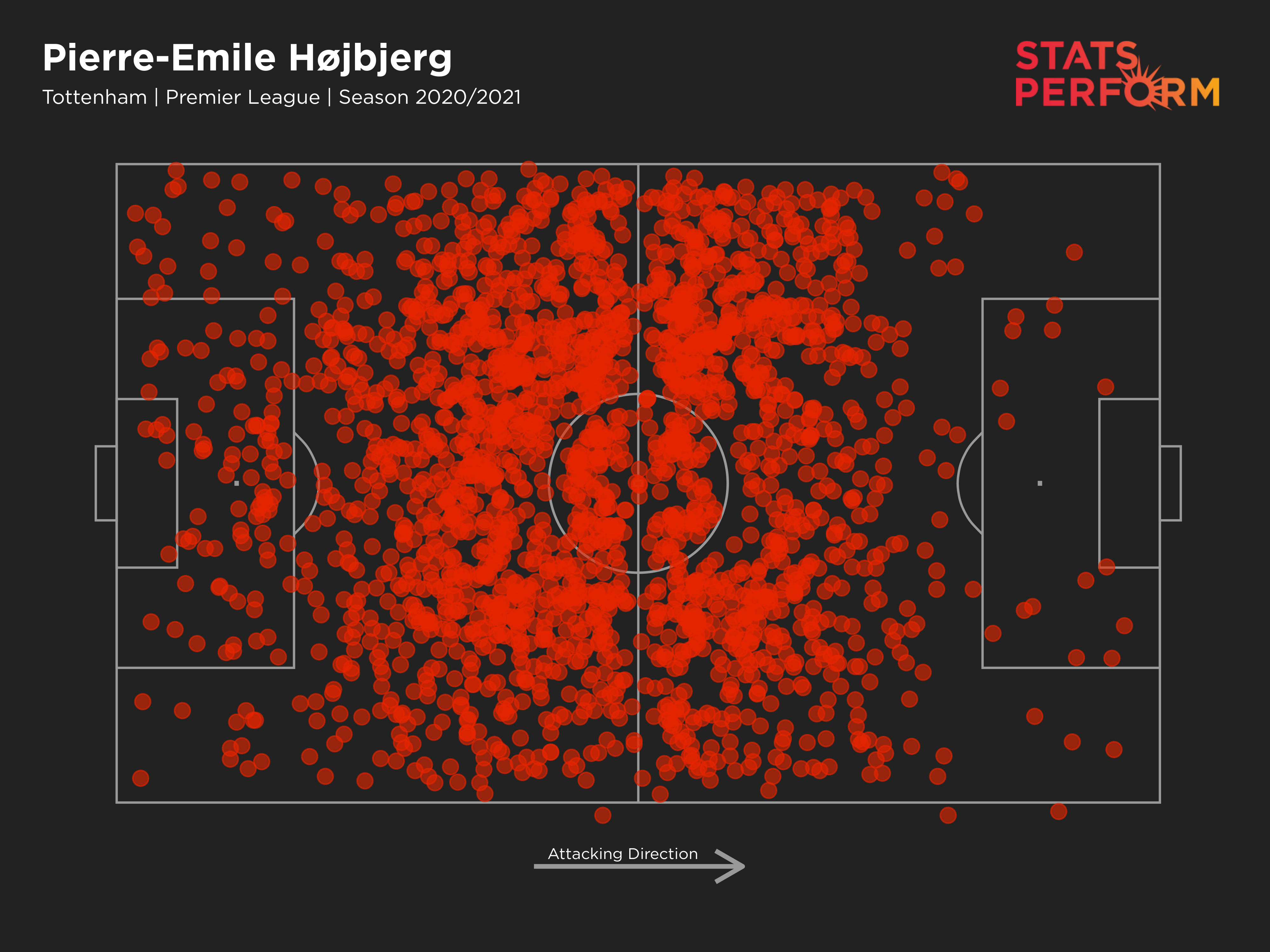 Doing Moura off the ball

This combination of endeavour and output can also be found higher up the field for Spurs. However, while Hojbjerg's excellent returns appear to clear a way into the team for Alli to complete the dream front four, Lucas' status as a number 10 Mourinho feels will do the hard yards is more of a problem for the England international.

Bale's opener against Palace came after Lucas snapped into a challenge to catch out Luka Milivojevic, laying on Kane to cross for the goal.

However, Alli is next on the list, winning the ball back deep in opposition territory 65 times. Additionally, he has made 116 appearances compared to the Brazilian's 147, with Lucas outdoing him 99 to 92 in terms of starts.

Over the same period, Lucas bests Alli 85-65 in terms of interceptions, and 171-139 on tackles, while Alli's use in deeper midfield positions might partly explain his 482-410 advantage when it comes to recoveries.

Put simply, Alli's numbers off the ball suggest he has the industry to thrive and make Tottenham's fab four a reality. But Mourinho has absolute faith in Lucas as a player who can give him just what he wants, something that means the former Paris Saint-Germain man is likely to get the nod this weekend.

Still, three out of four ain't bad. And it is the form of those three that gives Spurs plenty of reasons to believe a first league double over their old rivals since 1992-93 can be achieved.