Tanguy Ndombele could be crucial to Tottenham's hopes of beating Chelsea on Friday morning (AEDT) and getting their season back on track.

Tottenham have generally enjoyed playing Chelsea this season. A penalty shoot-out win in September saw them progress in an EFL Cup tie, while October's 0-0 draw at Stamford Bridge took them top of the Premier League.

Yet Jose Mourinho's men head into Thursday's (local time) clash with a little trepidation. After back-to-back defeats and just one win in four in the league, and with Chelsea playing largely without pressure as they get to grips with life under new boss Thomas Tuchel, the onus is on Spurs to deliver and underline their credentials as top-four contenders.

With Harry Kane injured and Son Heung-min without a goal in six games, getting three points looks far from straightforward. There is, however, an unlikely Mourinho acolyte who could lead the charge at Tottenham Hotspur Stadium.

Tanguy Ndombele has gone from peripheral irritant to midfield centrepiece at Spurs, sustaining his good form even during the recent downbeat run. It's a transformation few saw coming, but it has been hugely welcome to Mourinho, who has been unable to coax form out of Gareth Bale and apparently unwilling to try with Dele Alli but has talked of Ndombele's "big evolution" in recent months. 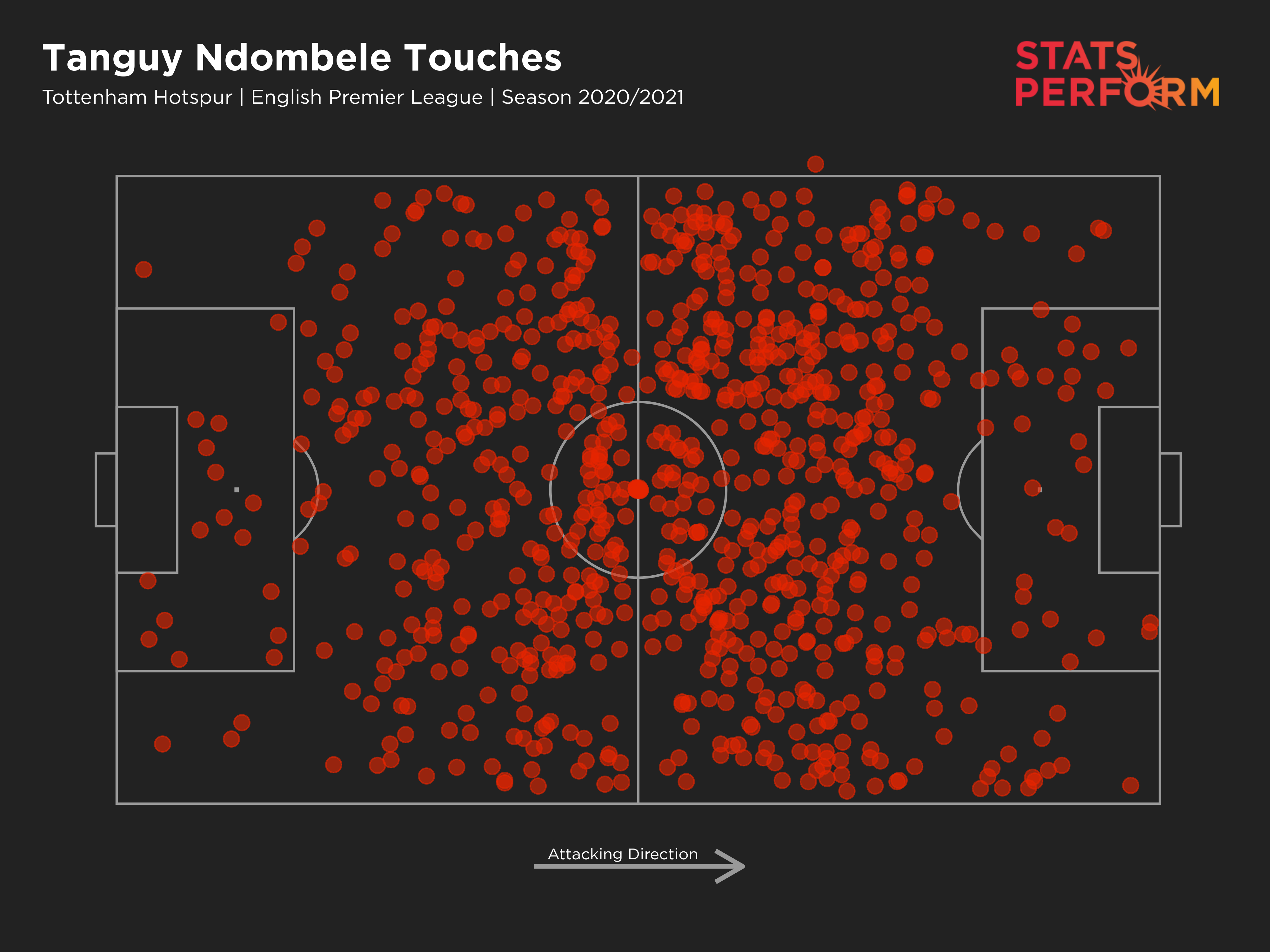 Ndombele has made 27 appearances in all competitions this season, with 21 of those as a starter. He has scored six goals and assisted three; only Lucas Moura (10), Son (26) and Kane (33) have had more direct goal involvements.

At the same stage of last season, when Spurs were also sixth in the league but three points worse off, Ndombele had scored two and set up three goals in only 13 starts. There were seven team-mates with more goal involvements.

Ndombele has created just over one chance per 90 minutes from open play in 2020-21, a drop of more than 0.5 since this stage of 2019-20. He has also slipped in successful passes in the opposition half per 90 minutes (29.6 from 32.4) and completed passes ending in the final third (13.4 from 15.3). His per-90 average for successful tackles and duels shows negligible change, so it's not as though he is being tasked with more defensive work at the expense of attacking abandon, either.

Besides, few would argue Ndombele is not enjoying his best spell since his reported €62million ($97M AUD) switch from Lyon. As former Spurs midfielder Gustavo Poyet told Stats Perform News: "It looks like it was not a feeling of him being part of a [Jose] Mourinho team. It was like a conflict in there of ideas.

"But it looks to me that this year, after pre-season, Ndombele understands his role perfectly, is playing in a more advanced position, and is really affecting the game in an incredible way."

So, what is it that he's doing so well?

Put simply, he runs with the ball and makes things happen.

Ndombele has attempted (56) and completed (41) take-ons, the most by any Spurs player this season. Indeed, Kane, who is second on that list, has only completed 26. Notably, 34 of Ndombele's completed take-ons have come in the opposition half, reflecting his advanced role.

Mourinho appears to have identified Ndombele has a previously underused weapon – he was only sixth for attempted dribbles at this stage last season – and encouraged him to be bold.

This season, Ndombele is third among Spurs players for ball carries – where a player moves five metres or more in possession – on 174, but 21 of those instances have ended in a take-on, which is seven more than any team-mate. Similarly, five carries have ended in a chance created, a figure bettered only by Son (eight) and Kane (10).

Ndombele has managed not only to win back the trust of one of the world's most demanding coaches, he has done it by filling a role vacated by Christian Eriksen and the out-of-favour Alli and developed it in his own style. Little wonder Poyet believes he is helping Spurs "go to another level".

The Uruguayan says, in all likelihood: "Mourinho was trying to convince him [Ndombele] last year about certain players getting [settled] very quickly and certain players need a little bit more time.

"Because let's remember in that position we were used to seeing Eriksen or Dele Alli and now we see Ndombele most of the time, so it's a very good story and he could be a key player for them."