Melburnians have every right to consider their city as the nation's sporting capital but when it comes to the round-ball game there can be no doubt any more about Sydney's position.

After winning three of the last four championships, the Sky Blues became the most successful club in the 43-year history of national league football. 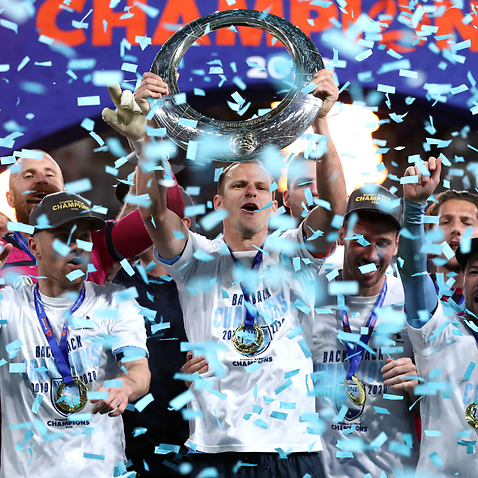 Their five championships enabled the Sky Blues to overtake four-time winners Melbourne Victory in the professional A-League's honours list along with Sydney City, Marconi and South Melbourne in the semi-professional National Soccer League that was disbanded in 2004.

The harbour city can now lay claim to a combined total of 17 national titles to Melbourne's 11 (see complete list below), making Sydney the benchmark of the domestic game.

The city also enjoyed Australia's only success in the AFC Champions League when Western Sydney Wanderers prevailed in 2014.

The grand final at Bankwest Stadium was never going to be a free-flowing spectacle many would have expected, given what was at stake.

Yet it was an absorbing contest, punctuated by fleeting moments of individual enterprise and brilliance that compensated for a disappointing level of football from a technical point of view.

The Sky Blues probably had the better chances over the 120 minutes but on each occasion goalkeeper Tom Glover came to City's rescue with vital interventions.

City were hard done by when a goal from defender Harrison Delbridge was ruled out by the VAR after striker Lachlan Wales drifted into an offside position and partly impeded goalkeeper Andrew Redmayne's vision.

Sydney also had every reason to complain when Curtis Good fouled striker Adam Le Fondre in the penalty area but referee Chris Beath and the VAR saw nothing wrong.

City shaded the first half thanks to a marked superiority in midfield and their ability to starve Milos Ninkovic of the ball.

Sydney improved after the resumption and managed to get their high-speed passing game going but they did not build enough momentum to put City under any sustained pressure.

So it went to extra time and the game was decided before the end of the first period.

Playmaker Luke Brattan came up with a measured pass to the overlapping Grant who came from the blind side of City's defence and essentially cushioned the medium-height ball with his chest and it rolled into the far corner of the net.

His moment of improvisation plus the kilometres he must have run throughout the evening earned him man-of-the-match honours.

Grant made his senior debut in 2008 and it took him a while to establish himself but his overall game has improved so much that he is now seen as a vital player in Sydney's playing system,

There certainly is much more to Grant's football than a good engine.