Sydney FC was on the wrong side of officialdom as two marginal decisions against them proved the difference in a 2-2 A-League draw with Central Coast Mariners.

In front of a bumper 10,173 crowd riding high on the Mariners' unexpected title push, the home side scored classy goals through Marco Urena and Matt Simon, Sydney returning serve through Milos Ninkovic and Trent Buhagiar.

But the Sky Blues were fiendishly unlucky not to claim full points, two critical decisions going against them.

The first was called in the 33rd minute, Bobo ruled offside when scoring, only for replays to show the penultimate touch came off a Mariners player.

Despite looking very much like a clearance, the VAR ruled the touch incidental with the decision standing. 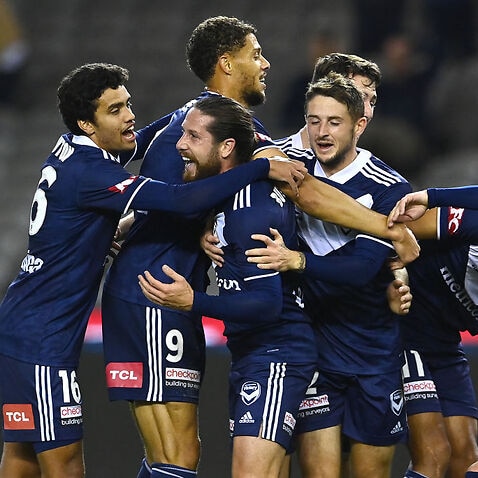 In the 57th minute the Brazilian appeared to score again with a header after some chaos in the goal-mouth but once more the VAR found fault.

This decision looked more on the money with Ninkovic adjudged offside when he appeared to impede the Mariners' Simon who sought to head the ball clear.

"I think the first (decision) they have definitely got it wrong," Sydney coach Steve Corica said.

"The defender has played at the ball so then that brings Bobo onside.

"They are saying the defender didn't play at the ball - I can't understand why he wouldn't be - he's a defender."

In between the refereeing controversies, there was plenty of high-quality football in a hugely entertaining game at Central Coast Stadium.

The Mariners were on the board after just six minutes when Urena showed all his guile to score.

Oliver Bozanic released the Costa Rican international beautifully with a long ball, Urena darting in between two defenders then dummying to confuse 'keeper Andrew Redmayne before pulling the trigger to make it 1-0.

Simon doubled the lead in the 41st minute with a quality finish.

Chipping over a Sydney defender, he found Joshua Nisbett who, with his back to goal, popped the ball overhead for Simon to regather and shoot truly on the angle.

Sydney finally got on the board when Ninkovic scored in first-half added-time after toe-poking a volley from a Luke Brattan ball.

Buhagiar then made up for some earlier poor finishing when he scored in the 83rd but there was to be no winner as the Sky Blues racked up their third draw in a row for the first time since 2007.

Mariners coach Alen Stajcic felt the decisions had shown consistency but preferred to concentrate on what was something of a return to spectator football.

"It was the most alive I have felt inside a ground in a couple of years."