Eren Derdiyok and Stephan Lichtsteiner netted as Switzerland maintained their 100 per cent start to 2018 FIFA World Cup qualifying courtesy of a 2-0 victory over the Faroe Islands.

Galatasaray striker Derdiyok smartly took down a long ball over the top before drilling a left-footed effort low under Faroe Islands goalkeeper Gunnar Nielsen in the 27th minute.

And Juventus defender Lichtsteiner made sure of the points with seven minutes remaining, heading in Ricardo Rodriguez's cross from close range.

The victory, their fourth from as many games, strengthened Switzerland's position at the top of Group B.

Hungary kept the pressure on Switzerland with a comfortable 4-0 win over Andorra in Budapest.

Andorra, who have not secured a point in FIFA World Cup qualification since September 2005, held out for 34 minutes before they were finally breached by a strike from the evergreen Zoltan Gera.

The hosts managed to get a second on the stroke of half-time when Adam Lang tapped in at the back post to score his first goal for his country.

Hungary started the second half on the front foot and extended their advantage through Adam Gyurcso before Adam Szalai notched a fourth late on. Giorgos Tzavelas crashed home a 25-yard equaliser in the fifth minute of added time to earn Greece a 1-1 draw with Bosnia and Herzegovina in a match which saw both teams finish with 10 men.

The visitors went in front after half-an-hour when Miralem Pjanic's venomous free-kick came off the left post, hit the back of unfortunate goalkeeper Orestis Karnezis and rebounded into the net.

Kostas Mitroglou and Kostas Fortounis both had efforts turned away by Asmir Begovic as the hosts looked to respond, while at the other end Edin Dzeko had a shot tipped round a post by Karnezis.

Dzeko was sent off in the 80th minute, picking up a second booking for a tussle with Sokratis Papastathopoulos during which he pulled down the defender's shorts.

In the melee that followed that incident Greece's Kyriakos Papadopoulos was also sent off for violent conduct.

But, just as it seemed the visitors would leave with the points, a bouncing ball broke to Tzavelas in space and he lashed an unstoppable shot inside the left post to equalise.

The point maintained Greece's unbeaten start in Group H and kept them three points ahead of their opponents, although they slipped two points behind pool leaders Belgium.

Cyprus were given a scare on the way to their 3-1 victory over 10-man Gibraltar in their clash at Nicosia.

The hosts took a deserved lead into the break after centre-back Konstantinos Laifis was quickest to react to Demetris Christofi's deflected free-kick and poked the ball past Gibraltar goalkeeper Deren Ibrahim.

The visitors replied six minutes after the restart when Lee Casciaro headed in Ryan Casciaro's cross as they searched for their first ever competitive point in major tournament qualification. 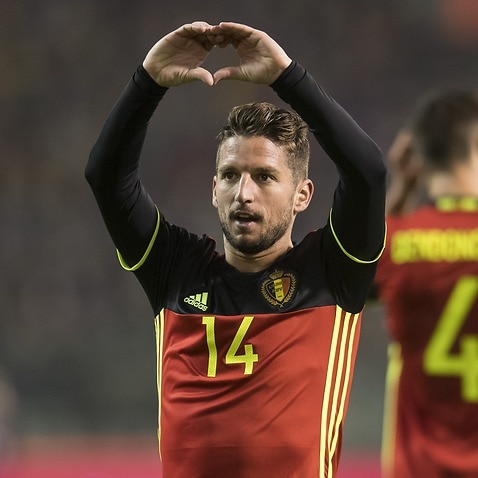 Ivelin Popov scored the only goal as Bulgaria clinched a 1-0 win against 10-man Belarus in Sofia.

Victory lifts fourth-placed Bulgaria four points clear of Belarus, who are still without a win after four group matches.

Former Arsenal midfielder Alexander Hleb was sent off for Belarus in the closing stages.