Luis Suarez is not struggling with an injury and will soon be back to his prolific best for Barcelona, according to Ernesto Valverde.

The Uruguay striker missed Barca's first two LaLiga matches due to a knee problem but marked his return to club action with a goal in the 5-0 thumping of Espanyol on September 9.

Since then Suarez has scored just twice in seven appearances in all competitions for the Catalan giants and appeared to be struggling with a hamstring issue during the midweek 3-1 win over Olympiacos in the UEFA Champions League. 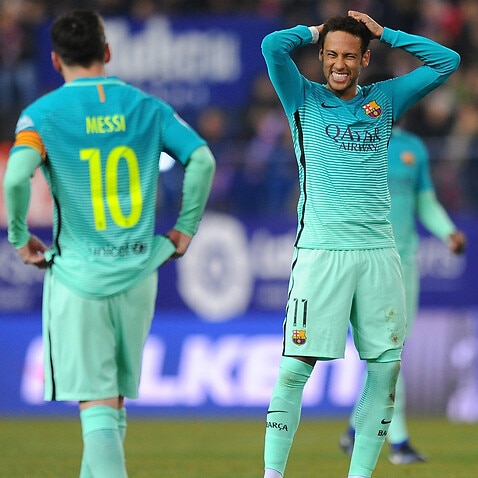 Valverde insisted the 30-year-old is not playing through an injury and backed him to start hitting the net with great regularity shortly.

"It's true the other day he had a small problem but I don't think it was anything major," said Valverde ahead of Saturday evening's (Sunday morning AEDT) match that pits LaLiga leaders Barca against bottom side Malaga at Camp Nou.

"In Luis's case he's a player who's always had a good relationship with goalscoring. He played well against Atletico [Madrid] and scored the equaliser, he had chances against Olympiacos.

"We know in a game he will have two or three chances and his team-mates will create and he's there being a nuisance to defenders. We don't think it's too much of a problem.

"I think it's going well and the [injury] problem he had before is fine now. Because he missed a chance here and there people ask me about Suarez, but it would worry me more if he didn't have chances.

"Little by little he'll get the goals. For strikers, the important thing is they have chances."

Barca have won just one of their last three home league matches against Malaga, scoring just one goal in the process.

Valverde - who confirmed Jordi Alba will not be risked - believes Michel's side will be fired up for the encounter and ready to step up their efforts having picked up just one point from eight matches.

"It's something to take into account. The truth is we know Malaga put in a good job against Barca regardless of the coaches who have been here," said the Barca boss.

"Barca had a decisive game against them last season in the fight for the title with Michel as coach, we have to take that into account.

"It's a team who are usually difficult for us and it's an extra motivation for us to be better prepared.

"They need the points and when you're in that situation you have to multiply your efforts. For us it's a chance to pick up three points and maintain our form and position."