Spain's youngsters had no problems cruising to a straightforward 4-0 win over Lithuania on Tuesday as the Under-21s filled in for the senior side's final pre-Euro 2020 warm-up match due to coronavirus protocols.

Spain quickly showed they were a cut above Lithuania and opened the scoring inside three minutes, Hugo Guillamon slamming home from 16 yards after Manu Garcia's low cross was deflected back towards the edge of the box. It was 2-0 with less than half an hour played when Brahim Diaz drilled across goal after being afforded a lot of space in the box following an incisive pass from Gonzalo Villar.

Lithuania were fortunate not to concede further goals before the break, as Tomas Svedkauskas saved Abel Ruiz's feeble penalty after Markas Beneta wrestled Bryan Gil – the only Spain player with a prior senior cap – to the ground, while the goalkeeper also denied Oscar Mingueza from point-blank range.

Half-time substitute Juan Miranda took just seven minutes to get his name on the scoresheet, with Svedkauskas only able to tip the Real Betis left-back's free-kick against the inside of the post and in. 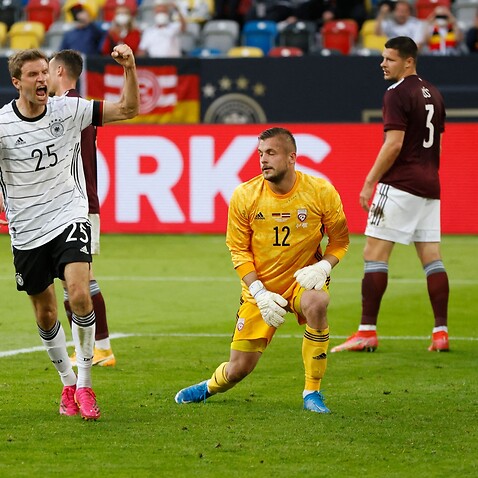 Germany round off Euros build-up with Latvia thrashing

Javi Puado, another introduced from the bench, made it 4-0 with 18 minutes to go as he latched on to Bryan's incisive chipped pass, skipped past a defender and blasted beyond Svedkauskas.

Although Spain could not match the 5-0 win they recorded over Lithuania back in 1993, their Under-21s at least showed they have plenty of talent in reserve should they be needed in the Euros.