Spain and Portugal drew 0-0 at the Wanda Metropolitano on Friday in an engaging warm-up friendly ahead of Euro 2020.

The previous two champions of Europe could not be separated in Madrid as Alvaro Morata and Diogo Jota missed the pick of the chances.

Luis Enrique and Fernando Santos named strong starting line-ups for an energetic first half, with Manchester City's Aymeric Laporte winning his first cap at the heart of the Spanish defence.

Laporte was a little fortunate not to be punished with 21 minutes left as Cristiano Ronaldo got free in the box before heading wide from one of the quieter second half's few good openings. 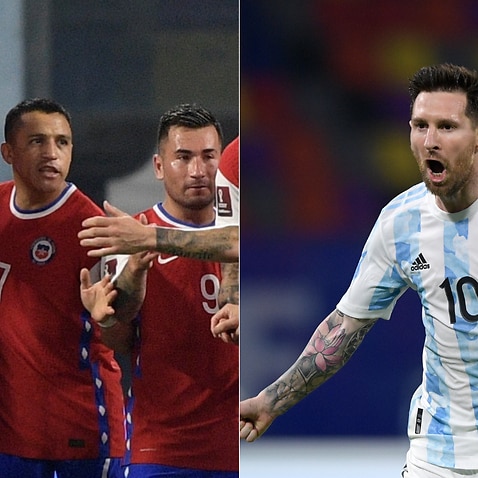 After a slick start in possession, Spain looked to have conceded from Portugal's first attack, but Jose Fonte's powerful header was disallowed for a push.

Ronaldo and Renato Sanches combined well to trigger a counter-attack, and the Portugal captain was almost presented with a chance when Spain goalkeeper Unai Simon's attempted clearance cannoned off the Juventus star.

Morata threatened twice just after the restart, denied by Simon and then by a Fonte block, with his follow-up effort bobbling wide, before Pablo Sarabia steered a good chance over the bar.

Portugal then should have taken the lead on the hour mark, Jota's header from six yards out deflected over after Ronaldo clipped a cross to the left-hand post.

Ronaldo then glanced wide from Bruno Fernandes' wicked delivery, Laporte given a let-off after allowing the forward a free header in the box.

Koke almost forced the winner in the closing minutes, his free-kick from the left of the box parried away by Rui Patricio before it could creep into the bottom-right corner. Morata should have won the contest in injury time, but could only rattle the crossbar after being gifted a free run at goal.

What does it mean? Euros heavyweights in need of sharpening before finals

Each of these sides have reason to be pleased with their performance on Friday, although a few more training sessions for the forwards would not go amiss.

There were just three efforts on target in the contest and two of those came in the dying minutes through Koke's free-kick, which was glanced on by Torres, and a last-gasp header from Danilo Pereira that Simon saved comfortably.

Sergio Busquets is one of the few surviving bastions of Spain's 2008-2012 dominance of the international stage, keeping his place in the squad despite not always looking his sharpest for Barcelona in 2020-21.

He managed 63 commanding minutes here at the heart of midfield, winning back possession 12 times and making 34 passes in the Portugal half – each game-high totals during his time on the pitch.

Ill-suited to Portugal's early counter-attacking play, he completed only six passes before being withdrawn at the break for debutant Pote.

Each side has one more warm-up game before their Euros campaigns start. Spain face Lithuania in Leganes on Tuesday, while Portugal host Israel in Lisbon on Wednesday.