Only three Australians tasted Premier League action this season, and Southampton’s attacking midfielder Caleb Watts was among them.

The former Joey ended up making four senior appearances in all competitions before being sidelined at the tail-end of the campaign by a calf injury.

But the teenager - a near certainty for a Socceroos World Cup debut in Kuwait next month before that setback - returns to the green and gold fold in Spain this week as part of an Olyroos squad chasing seats on the plane to Tokyo.

The England-born 19-year-old is possibly the most highly prized of Australia’s next gen talents, and will likely continue his EPL progression under Ralph Hasenhuttl at St Mary’s next season.

For now, though, Watts is desperate to impress coach Gary van Egmond in Marbella, where a largely overseas-based squad face Ireland, Saudi Arabia, Mexico and Romania early next month. 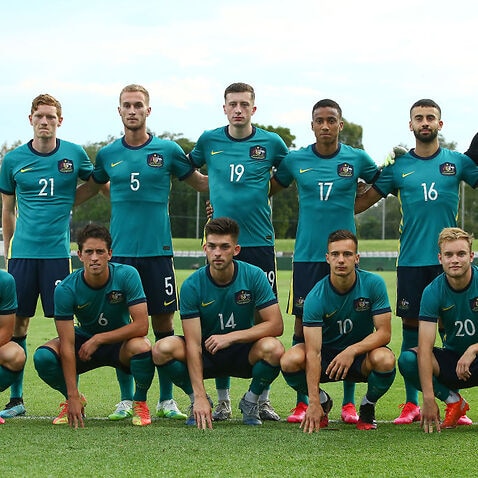 He believes the 116 first team minutes he’s clocked up for the Saints will have a positive national team spin-off.

“I made my league debut against Arsenal (in January) and while I’d loved to have forced more minutes, I think overall I’ve had a decent year,” he said.

“I’m looking forward to next season now because I’ve got some good foundations to build on.

“I’ll just keep pushing for more minutes and I think what I’ve learned already I can bring with me to the national team set-up.

“I’d love to be a part of the Olympic Games - I’ve just got to go over there and perform in Spain now.”

Watts burst onto the stage at the FIFA U-17 World Cup in Brazil where Australia reached the knockout stages in 2019.

He’s been lauded as a “wonderful talent” by Joeys coach turned interim FA technical director Trevor Morgan and could well feature in the final phase of the Socceroos’ qualifying journey for Qatar 2022.

He’s not getting ahead of himself though.

“I’ll take things as they come and just concentrate on playing as many games as I can in the Premier League,” he added.

“I think the rest will come if you’re playing well and having success at your club.

“I’ve improved physically this year - I’ve bulked up a bit and I’m a lot stronger.

“I’ve been working on a lot of aspects to my game. Getting more goals and assists and being clinical around the penalty box.

“I think the next time I get a chance with Australia you’ll see a big improvement in my game.

“I’ve had so much help and advice from my teammates at Southampton, players like (England international) James Ward-Prowse.

“The club is famous for producing players - the names are all up there on the canteen walls (stars like Gareth Bale, Luke Shaw and Adam Lallana).

“Hopefully I can emulate one of the big names in the future that have come through academy.”