Les Murray has been Australia's foremost football pundit, the face of SBS football coverage for countless years. He poured his years of experience into his blogs that were a regular feature of the site and here we have picked out some of the more timeless of his pieces.

Forging a unique identity for football on the sporting landscape

Competing against the other major football codes, cricket and the myriad of sports that Australians occupy themselves with has always been the challenge for football in the land of oval balls and Don Bradman.

"The penny is finally dropping. Football is not a sport and its more even than a religion. It’s a culture.

Like all cultures, football has its rituals, its customs, its deities, its language, its music, its respect for its history, its sense of identity and its urge to celebrate and demonstrate it. Football’s ultimate source of strength is its fans, the global football nation, billions strong, who live and breathe the game every minute of their lives and express through it a sense of their belonging.

This is not a game in which only results matter, and who finishes first, sixth or last. Those things are sideshows, numericals by which rivalries are measured over short instants. They are not where a football club’s strengths are rooted." - Les Murray, 2013 We are football, and a culture

An advocate of minority rights

Les' own history as a migrant left him better placed than many to comment on the changing social fabric of Australian football. From the occasionally racially fraught days of cultural clashes during the NSL to outright racism, he saw it all through his unique lens.

"It should be a lesson to all A-League clubs, but especially the league’s governors at FFA. The ethnically divided league that was the old NSL is dead. But its legated constituency, now as a united force, potentially and actually, is not just alive and breathing but is the lifeblood of 'new football'.

In fact what is happening is that the milling throngs, most of them young people, who hail from the ethnic communities and have a congenital love for football, are being shunned, ignored and being turned away. It’s a recipe for disaster." - Les Murray, 2011 Defending the sport from the mainstream media

Football or soccer, whichever you call it probably decides which side of the fence you are on, divides the Australian sporting media. There are bandwagoners, those who are passionate fans and still others that derive more than a little schadenfreude from the failures of football on the domestic scene. Les was always the staunchest supporter of the domestic football scene.

Small wonder, given that he had seen the game grow from a sideshow to one of the main fixtures of the Australian sporting landscape.

"I see the anti-soccer mob back home has found a fresh horse to ride on – Australia’s failure to advance to the second phase of the World Cup. Boy, they are loving this.

That’s the fine line between success and failure in a football World Cup, the wondrous fickleness of the game that these miserable Neanderthals do not understand, or refuse to see." - Les Murray, 2010 Football has little to worry about

Les came out to Australia in 1957, arriving as an immigrant who couldn't speak the language, yet was fluent in football. He's seen more games than most modern-day pundits have eaten hot dinners, and drew upon that experience when reflecting upon the journey the national team has taken as Australia has grown as a football nation.

"In 1965 the team’s preparations consisted of a brief camp in Cairns before they faced North Korea. After the two games against the North Koreans (they lost the second game by a less embarrassing 3-1) the team went on to play a series of friendlies in South East Asia. In today’s world things would be the other way around and those friendlies would be played as preparation games before the big test not after it." - Les Murray, 2016 Defender of the fans in the stands

The demonisation of football fans within the mainstream media is nothing new, and Les was always a champion of those that make the footballing experience and provide the vibrant atmosphere at matches.

"Ignorant forces within and on the periphery of the game are actually acting to chase more fans away. Even lower crowd numbers are surely to be the consequence of the heavy handed way in which the more enthusiastic, more active fans are being treated by muscle-happy security staff and police around the country." - Les Murray, 2011 Let the fans be fans

Of course, the last word should be left to the great man himself, he penned a reflection after his semi-retirement from SBS in 2014.

"The mission was not to simply build or promote football, but rather to enrich Australia through the medium of football. To bring our country to being a true citizen of the world and converse with it in the only true universal language.

There are, of course, now many other media outlets in Australia on which football can be viewed and enjoyed.  Australian audiences are now as well fed on football as any in the world. But this too is down to SBS and the monster, if you like, that it has created." - Les Murray, 2014 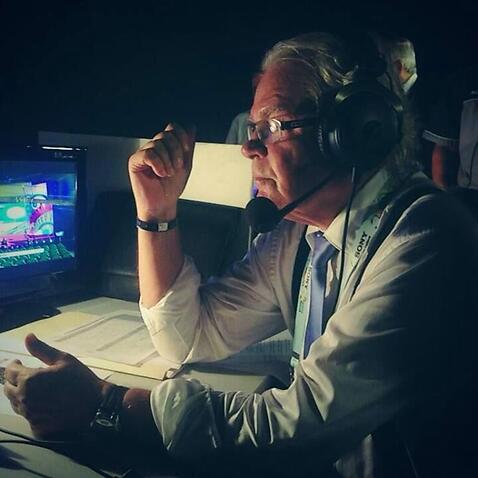