The Netherlands midfielder has made nine starts for United since arriving from Ajax for a reported £40million in the close season, just two of those coming in the Premier League.

He has not featured at all in United's last three games since the 1-0 FA Cup win over Watford on January 9, but he will play a part in Sunday's fourth-round tie against Liverpool.

Solskjaer himself found regular starts hard to come by during his playing days at the club under Alex Ferguson and has praised Van de Beek for remaining professional. "I wouldn't say that Donny is happy," he said. "Of course, he wants to play more, but he gets about his job in the right manner.

"He reminds me a lot about myself, when I first came in, that he understands my difficulties and challenges

"We are doing well and have got players who are playing really well in his position.

"I was the same with Sir Alex. When he left me out I understood and I was happy for the team to win – and Donny is that type of guy."

Van de Beek has made 10 Premier League appearances for United in total and scored his only goal in the 3-1 win over Crystal Palace in September.

The 23-year-old has yet to assist a goal and has created just two big chances for his team-mates across those 10 matches.

Van de Beek ranks higher for dribbles completed (1.43), however, with Pogba (1.75) the only midfielder above him in that metric.

Solskjaer continued: "He knows he is important for us and knows he is going to play many games. 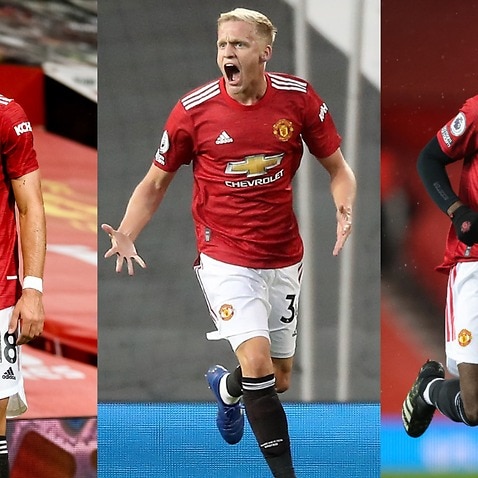 "He will definitely be involved in this game against Liverpool and he might be the deciding factor in the game.

"He trusts his own quality. He is a quietly confident guy who deep down knows he is good enough and is just waiting for his opportunity."

Having been used in a variety of roles in United's midfield, Van de Beek – utilised as a box-to-box threat during his Ajax days – scored 28 goals in total in the Eredivisie.

Arguably his most impressive form for Ajax came in the 2018-19 Champions League campaign, with his four goals helping the Dutch giants to the semi-finals.