The Socceroos' 2022 FIFA World Cup qualifying campaign received an invaluable boost after several overseas clubs promised to release their selected players a week before the start of the international window.

The clubs' generous gesture will allow coach Graham Arnold to hold a long camp in Dubai in preparation for the four-match qualifying hub in Kuwait starting on June 4.

Clubs are obliged to release their players by no later than May 31 so the Socceroos squad of 28 outfield players and four goalkeepers will have more time to prepare for the resumption of Group B that was interrupted in March 2020 due to the COVID-19 pandemic.

They lead the Kuwaitis and Jordanians by two points and have a game in hand. 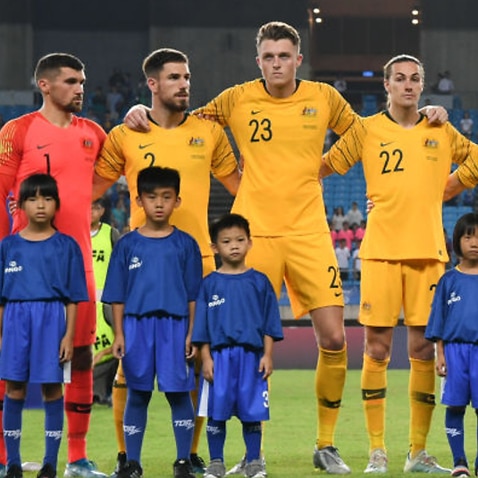 "The overseas-based clubs who have Socceroos players in their ranks have shown incredible goodwill to release them on May 24, a week before they were supposed to," Arnold said.

"Okay, their season will have finished but they have every right to keep them until the window opens so they are really doing us a favour, which is probably the result of a strong relationship we have built over the years with foreign clubs.

"Some players will arrive closer to May 31 but the generous gesture is going to be a great help for us and I cannot be more grateful to those clubs who have respect for national teams.

"The reality is we have not demanded their players for 18 months so they are paying us back, which is great because we'll be getting 15 or 16 players early.

"We therefore can gather in Dubai on May 24 instead of a week later and get across to acclimatise and get used to different surfaces before we go to Kuwait.

"The hub will provide us with short turnarounds - we have to play four games in 12 days - so a large and well prepared squad will be crucial.

"At this stage it looks like we'll have more players from overseas than A-League clubs but I honestly cannot say how many because, with this pandemic business, the situation is changing every day and some of the players have different issues in different countries.

"For this reason, I will not be announcing the squad till later in the month."

Arnold said he was devastated to learn of goalkeeper Mitch Langerak's decision to quit international football.

Langerak, who is in sparkling form for Nagoya Grampus in Japan, has said that the prospect of spending a lot of time away from his young family due the pandemic's quarantine requirements forced his hand.

"It was a complete shock to receive the call and it certainly has thrown a spanner in the works," Arnold said.

"We had been monitoring him closely for weeks and were excited to see him do so well but with this pandemic you have to respect everyone's personal issues and choices and I would never ever try to change that.

"Mitch had a look at the programme we had and the periods of quarantine he would have had to undergo in Australia and in Japan and he made a decision based on family. I accept it and support him because family is number one in life."

With Langerak unavailable, Mat Ryan, Danny Vukovic and Andrew Redmayne could all make the trip to Kuwait. The fourth goalkeeper is likely to be Adam Federici or Lawrence Thomas.

The captaincy issue is still up in the air and Arnold said he would speak to the team once they assemble in Dubai.

At this stage, the three contenders are believed to be Ryan, Mathew Leckie and Trent Sainsbury.