Australia remain on course to top Group B and progress to the third round of AFC qualifying for the 2018 FIFA World Cup after a thumping 7-0 victory over Tajikistan at the Adelaide Oval.

The Socceroos completely dominated Tajikistan, ranked 150th in the world, with a performance that could have seen the score hit double digits had it not been for the woodwork.

Tom Rogic and Nathan Burns scored doubles, while Mile Jedinak, Mark Milligan and Massimo Luongo also got on the scoresheet.

Another positive for the Socceroos was the performance of Apostolos Giannou on debut. The striker did everything but score, setting up numerous opportunities for his team-mates as well as winning two penalties that were converted by Jedinak and Milligan respectively, and hitting the post.

The Socceroos' win puts them in the box seat to finish top of the qualifying section going into their final group fixture against Jordan in Sydney on Tuesday night.

Failure to win for Harry Redknapp's men, who thumped Bangladesh 8-0 to set up a top of the table showdown with the Socceroos, would see Australia progress automatically to the final qualifying stage and secure their place in the 2019 AFC Asian Cup. 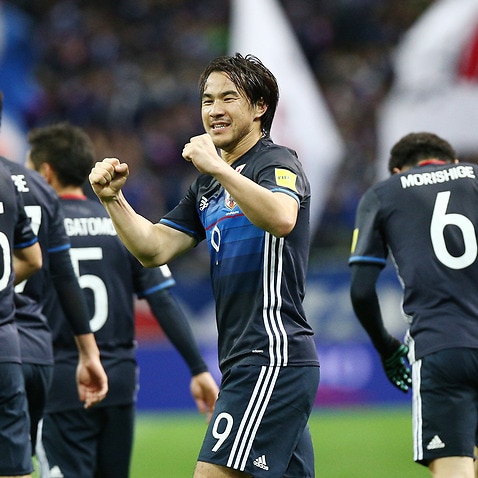 Australia made a blistering start to the match against Tajikistan when Luongo scored in the second minute with a well placed drive from the edge of the box that was beyond the reach of Alisher Tuychiev and into the bottom left-hand corner of the goal.

The Socceroos pressed relentlessly for the first 20 minutes before taking their foot off the gas slightly after Jedinak made it 2-0 from the spot after Giannou was brought down by the 'keeper.

The lively Giannou, who made a friendly appearance for his native Greece before switching allegiances, lifted well over the crossbar from a Leckie cutback as the Socceroos' pressure showed no sign of relenting, before Burns' effort suffered the same fate after he beat Tuychiev to a cross from the right.

Tuychiev then got down well to save a Jedinak header in the closing stages of the half, but a second penalty 12 minutes into the second period put the result beyond doubt.

Jedinak was taken off at half-time, presumably to rest for the Jordan clash and his replacement Milligan made it 3-0 in the 57th minute after Giannou won a second penalty.

Tuychiev was strong to beat away a Giannou effort soon after, but he was left picking the ball out of the back of his net once again after 66 minutes.

Burns couldn't miss when he got on the end of a pin-point Aaron Mooy cross from the right. The Melbourne City midfielder was outstanding throughout the match, leaving little doubt he has the talent to push on to greater things in the future.

The introduction of Tom Rogic in the 67th minute added further spark to Australia's attack.

He scored the fifth just two minutes later , his volley judged to have cannoned over the line from the underside of the crossbar, although Giannou was on hand to make absolutely sure of the goal.

Rogic then netted the goal of the night in the 72nd with an outrageous outside-of-the-foot strike, after selling his opponent a feint, to make it 6-0.

35439 a great crowd given lowly opposition & that people usually begin drive out of town for the long weekend tonight. #GoSocceroos #AUSvTJK

Rogic, substitute Robbie Kruse and Mooy all struck the crossbar in a remarkable spell of pressure late on, before Giannou smacked an effort off the post when he should have scored.

Finally, Burns rounded off the scoring with a placed header two minutes from time to put the icing on a comprehensive performance and give Ange Postecoglou his biggest ever win as coach of the national team.