Socceroos boss Ange Postecoglou has outlined how Australia are preparing to shock the football world and beat Germany in their Confederations Cup opener.

Midfield superiority. Attacking from wide. Pace across the park.

And a 90-minute performance that the Socceroos are yet to put together under Postecoglou's adventurous 3-2-4-1 system.

No one from the Australian setup is underestimating their opponent.

Germany aren't world champions for nothing and have brought a squad of talented and hungry young stars to Russia - in the place of most of their World Cup winners - eager to forge international careers. 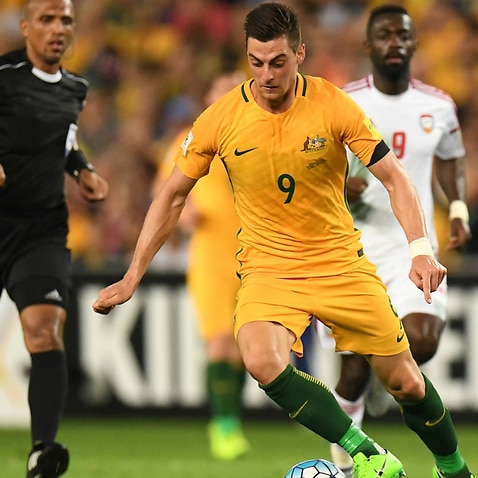 But as the Monday night (Tuesday morning AEST) clash with the world champions draws nearer, no cracks in the confidence are appearing from the Socceroos camp.

"We need to be at our very best. There's no shying away from that. We're not going to make any sort of impact unless we're absolutely at the peak of our powers in everything we do," Postecoglou said.

"That's not out of our reach at this point.

"We've got midfield depth ... some real attacking weapons out wide and the ability to really out run and out pace teams.

"I've been really happy (with the new system). The kind of things I want to bring out in our game, it has.

"It hasn't for 90 minutes yet but I think we're not too far away from that.

"As it sits right now we're in good shape to perform at our very best. If we do that we're a chance."

Robbie Kruse has overcome a knee knock suffered in the friendly loss to Brazil, ensuring every Socceroo is fit and available for selection against Germany.

Rapid-fire matches with Cameroon and Chile follow for Australia, with the top two sides from the four-team group progressing to the semi-finals.

It's a cut-throat system that makes the opening match "crucial" to Postecoglou.

"And a strong performance against a team like Germany gives you confidence to face anyone."

Australia has decent form against Joachim Loew's side.

In 2011, the Socceroos shocked a below-strength side with a 2-1 win in Monchengladbach.

After their Asian Cup win in 2015, Postecoglou took his champions to Germany for a friendly which Australia led before drawing 2-2.

Seven of his current squad were in the side that day, including goalscorer James Troisi, and Postecoglou said he expected the memory of that day to be front of mind. "We competed well that night, absolutely," he said.

"The players I'm sure did get a bit of heart out of that ... and the way the team's evolving we feel positive playing against anyone.

"Whether that's Germany or against anyone else in this tournament, there's a belief within the group that if we stick to our structures and play well we can match the very best."