Socceroos utility Jackson Irvine believes Australia’s midfield is as good as any of the world’s best teams, and is confident they will prove their quality with big performances at the 2018 FIFA World Cup in Russia.

Irvine joins the Socceroos in Turkey for their pre-World Cup training camp after a strong season with Championship side Hull City where he played a major part in helping the Nigel Adkins-coached side avoid relegation.

And he isn’t the only overseas Aussie midfielder coming off a stellar season, with Aaron Mooy making his mark in England's top flight, Mile Jedinak one game away from Premier League promotion, Massimo Luongo winning player of the season honours at QPR and Tom Rogic picking up more silverware with Celtic in Scotland.

In Russia, the Socceroos will take on a star-studded France midfield featuring some of the finest players in their positions including Paul Pogba and Ngolo Kante.

However, Irvine has complete belief in his teammates when asked if Australia had the players to match it with the powerhouse midfield units they are set to face during the World Cup. Selection battle heats up as more Socceroos arrive in camp

“We have a lot of depth in that area of the pitch and a lot of us are playing in England and overseas which has got to give you great confidence,” Irvine said.

“It’s something we are going to have to utilise the best we can during the tournament.

“We’ve got some extremely talented players all across the pitch, but our midfield area is somewhere we have always had that depth.”

The overseas contingent will do battle with A-League selections Dimi Petratos and Josh Brillante to earn their spot in Bert van Marwijk’s final 23-man squad for the World Cup, but Irvine believes the extra competition can only be a good thing.

“It has been great to see the boys playing regularly and playing well at domestic level and that can only be a good thing,” he said. 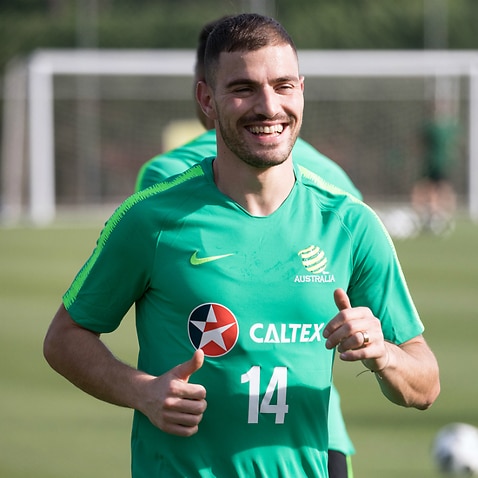 “It is a long season in the UK, it is a lot of football and a lot of games but it holds you in good stead and it's great to see your teammates doing well.”

The 25-year-old said the squad was being put through their paces during a gruelling pre-World Cup camp which was nothing like he had experienced.

"It’s unusual to be part of the Socceroos set-up and be training as hard as we are because when we come in normally it’s about getting a couple of days together and building into a game,” he said.

“With an extended period like this we can really start to train a bit harder and push ourselves a bit further, and I’m sure it is only going to get tougher over the coming weeks.

“We are all still aware that unfortunately there are three players who won’t make it past this point of the campaign. There is plenty of excitement among the boys but we know there is work to be done.