The World Game resumes its monthly feature on Socceroos stars who left their mark on Australian football. Overlapping full-back Jason Van Blerk recalls his epic duels with Diego Maradona and the day he and his Millwall teammates had to run for their lives after a riot broke out in an FA Cup tie against Chelsea.

Van Blerk, who played in 27 full internationals, says young Australian players should be taught to master the art of football, not be cast into a positional straight jacket.

You should essentially be a footballer not a full-back, midfielder or forward, he says.

The result of this misguided policy can be seen in the current Socceroos squad which clearly lacks versatility, according to Van Blerk.

"When we were growing up in Sydney in the 70s, most kids just wanted to play football," Van Blerk, 52, said.

"We were not pushed into a position because the focus was to learn how to play and enjoy football. At the weekend you were given a role - I played centre-back a few times - but you never stagnated in a particular position. The philosophy when I was growing up was to go out there and play football.

"This is the problem with today's game ... even at Socceroos level. We are concentrating too much on producing right-backs, defensive midfielders, wing-backs, false No. 9s and so forth, but what we should be focussing on is the production of 'footballers'.

"In the 80s, for example, Socceroos players could be used in several positions because they were versatile. It is not the case today.

"I used to go to Old Trafford to watch such special players as David Beckham, Michael Owen and Gary Neville because they were actual 'footballers' who could play in more than one position.

"In Europe and South America, they don't make you a left-back or a right winger or a striker ... they make you a footballer." 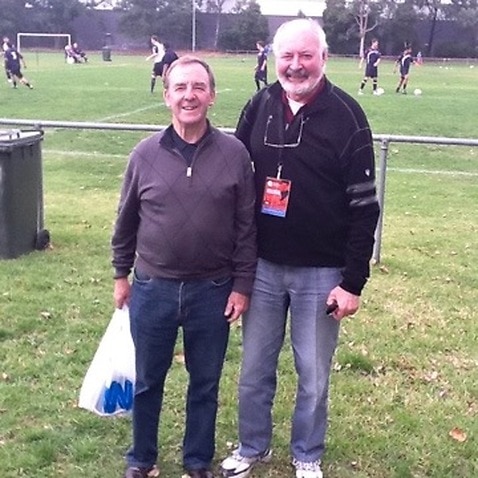 Socceroos Greats - Where are they now: Ted Smith

Sydney-born Van Blerk, who will be remembered as one of the finest left-backs to wear a Socceroos jersey, was happy to talk to The World Game about his career.

"I've moved up to MacMasters Beach on the Central Coast. I've got a courier job around the coast and after three I do one or two hours of football coaching at private schools in the area."

You played most of your international matches under Eddie Thomson, who was a big fan of yours. Did he encourage you to have a go in attack whenever possible?

"I was a box-to-box player who would probably run 16 kilometres a game and he liked that philosophy. You never took a backward step those days. Inside me I had Aurelio Vidmar who was more right-footed while I was a leftie. Thommo always encouraged me to get in as many crosses as I could.

"There is an art to crossing and strikers in my days wanted the ball in the box as early as possible so you had to practise your crossing. Today's game is all about ball retention so many wingers or wing-backs are reluctant to cross the ball."

You played in the latter stages of the Socceroos' 1994 FIFA World Cup qualifying campaign. After beating Canada, was Argentina a bridge too far or a missed opportunity?

"Argentina were not the team they used to be. They were forced to meet us because they had lost 5-0 to Colombia, for example. We had a good, strong squad that had been together for a long time. Our confidence grew after we beat Canada and we had no fear of Argentina. Our approach was to take the game to them, defend as a team, regain the ball as quickly as possible and see what happens. In the end, we lost by one flukey goal."

Do you know why Terry Venables never picked you in the Socceroos' campaign to reach France '98?

"No idea. Looking at his squad I probably would have scratched my head about one or two players selected but I don't think I fitted into his philosophy at all. Stan Lazaridis was a more attacking wing-back while I was probably better defensively but I honestly cannot answer that question."

You were one of three father-son combinations to play for Australia. How much did your dad Cliff influence your career?

"I was born into football. My dad grew up in Zimbabwe and came to Australia in 1961. He instilled in us the importance of working hard and getting your reward in life. It was the method behind most immigrant families. And that is how he taught me to play. Australian kids were hard workers off the ball which is probably why Aussie teams were so hard to play against."

What do you remember most vividly from your APIA Leichhardt days?

"My dad played for APIA and later coached the club's juniors. The thing with playing for an Australian club in my days was that you were often coached by former professional players. This is what happened to me from the age of seven. You never got coached by someone who had never kicked a ball. This helped my career from day one."

Did the two years you spent at Go Ahead Eagles in the Netherlands make you the top left-back we all know?

"You've got to go back a little further than that. The day I turned up at the Australian Institute of Sport to be coached by Ron Smith and Jim Shoulder was crucial to my development. Their coaching was out of this world. When I left the AIS, I joined Blacktown City who were coached by Les Scheinflug, who was an ex-professional himself. When I went to Go Ahead, I was ready."

In 1994 you joined Millwall, where the presence of fellow Aussies Alistair Edwards and David Mitchell must have helped you settle in quickly.

"Of course. Mitch was my roommate during the Canada and Argentina qualifiers. After I finished with Go Ahead I asked him to speak to his Millwall manager Mick McCarthy and ask him if he could give me a trial. I always loved the passion and energy of English football. I went there for a trial and they signed me within a week."

Tell us about the night you helped Millwall beat Arsenal at Highbury in the FA Cup in 1995.

"That was interesting. After having some visa problems I took over at left-back from Ben Thatcher, who would end up at Tottenham, and by the time the Arsenal tie came up in January, I was playing regularly. The game at home ended 0-0 and it had to be stopped for a few minutes when fighting broke out on the terraces. In the replay I think I set up the first goal and we won 2-0. It was a feeling I cannot describe."

In the next round you guys beat Chelsea at Stamford Bridge in a shootout ... and you slotted home one of the penalties.

"Chelsea's ground those days was like a garden shed and I remember the Millwall fans were placed in a temporary scaffolding behind the goal. After a 0-0 draw at home we had a couple of chances in the replay but it ended 1-1. We took five great penalties and Kasey Keller saved Chelsea's fifth and we won the shootout. We then went to celebrate with the American goalkeeper but about 500 Chelsea supporters invaded the pitch and we had to turn around and run back to the dressing rooms as quickly as we could. Unfortunately Mitch, who was an ex-Chelsea player, got caught up in the riot but he was okay."

Playing regularly for West Bromwich would have been pretty satisfying too.

"When I left Millwall I signed for Manchester City. You could not give up an opportunity to play for one of England's biggest clubs. I was a decent player those days but I had to play a certain number of games to keep my visa and when West Brom came knocking in the second part of the season I joined them and had a great time at The Hawthorns."

Your cup run with Millwall must be the highlight of your decade in English football.

"I think so. I was involved in other cup ties but those first six months at The Den were amazing. The thing about playing for Millwall was that we were the underdogs when we faced Arsenal and Chelsea which made our wins very special. But then we lost to Queens Park Rangers in the fifth round to a silly penalty!"

"Of course not. As a professional footballer and having grown up in Australia watching English football late at night on television, it was my dream."

Who were the toughest strikers you faced?

"There were two, actually. Diego Maradona and Mark Hughes, who were both small and stocky guys and as hard as granite.

"Maradona in particular was incredibly strong. I kicked him a few times in the two matches in 1993 and he just looked at me, as if to say he was not bothered. I remember getting him on the ankle in the return at the Monumental and he went down heavily. I was just hoping he got up quickly so we could get on with the game because the hostile crowd must have been baying for my blood."

Who were the best players you played with?

"Without doubt Georgian midfielder Georgi Kinkladze, whom I had the pleasure of playing with at Man City. He was amazing ... and a lovely bloke too."