Australia moved five points clear at the top of their World Cup qualifying group with a 3-0 victory over Kuwait.

Matthew Leckie scored his third goal in three Socceroos appearances to put them ahead after just a minute had been played, the striker nodding home Martin Boyle's cross.

Boyle had the chance to double the lead after Bandar Al Salama brought down James Holland in the box, and although his penalty was saved, Jackson Irvine was on hand to convert the rebound.

Boyle sent a shot narrowly wide and Aziz Behich fizzed an effort inches past the right-hand post as Australia ended the half with 15 shots to Kuwait's three.

After 567 days, the @Socceroos returned to @FIFAWorldCup Qualifying action in style with a 3-0 win over Kuwait. #AUSvKUW #AllForTheSocceroos

Mat Ryan had to be alert to keep out Shabaib Al-Khaldi's strike at the near post just past the hour mark, but Australia made the three points safe four minutes later, Ajdin Hrustic's free-kick bamboozling goalkeeper Sulaiman Abdulghafoor and going in off the right-hand post.

Hrustic's first goal for his country – the first direct free-kick scored by a Socceroo since Mile Jedinak in November 2017 – took Graham Arnold's side to 19 goals scored in their past five matches. 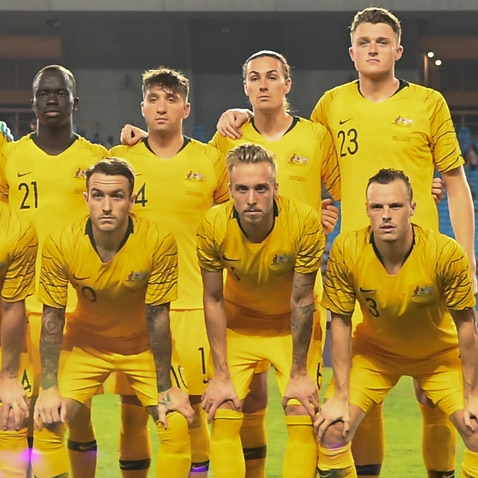 Give fresh-faced Socceroos clean slate ahead of international return

Arnold was able to offer game time to three debutants, with Fran Karacic starting at right-back and both Kenneth Dougall and Riley McGree coming off the bench in the second half, while Chris Ikonomidis made his first appearance since recovering from an anterior cruciate ligament injury.

Australia sit five points ahead of Kuwait and Jordan in Group B, having won all five of their opening matches.