A reluctance to praise wonder-teen Daniel Arzani shows the Socceroos are keen to protect the 2018 FIFA World Cup bolter, but he is also yet to gain respect and trust.

Within just 10 minutes of training, Arzani showed his ingenuity and his impertinence.

In his first session after being named in Australia's squad for the FIFA World Cup, the 19-year-old was frustrated.

His tricks weren't working, his touch was just slightly off. And it was hot.

After being called offside by an assistant, he bit back.

Soon tracking back into position, he corralled Josh Risdon outside the cones denoting the makeshift field - but play continued. At the next stoppage, team Trent Sainsbury couldn't hide his own frustration.

The team leader barked orders at Arzani that might be heard at any club's training session - play the whistle, and respect the coach.

The Melbourne City flyer took the ball inside the box, drew and turned two defenders before knocking the ball into enough space to cut back for Andrew Nabbout, who scored a back-post tap-in.

It was a mesmerising reminder of the precocious teen's talents. The curious case of Kruse and charge of the spite brigade

Arzani burst onto the scene this season, only making a first start for Melbourne City in January.

By season's end he had two goals, a string of assists and the A-League Young Player of the Year award to his name.

City coach Warren Joyce spoke often of his X-Factor, but his need to knuckle down and do the hard graft.

The coach was attempting to protect his young star, as was team-mate Bruno Fornaroli, who cautioned others against expecting too much from Arzani. "He is young and has to learn," the Uruguayan said.

"He has big quality, massive quality to play in the big leagues and be maybe one of the most important players for Australia.

"But everyone has to help him. Referees. The club. Team-mates. Journalists too.

"It's time to say 'calm Daniel' and let him free to play."

It can be hard to stay calm when Arzani gets on the ball - both as a defender and as a fan.

The Iranian-Australian can also heighten expectations on himself.

Arzani's youth was evident when he took the bait in a Twitter Q and A session, saying he'd like to nutmeg France's Paul Pogba when the two countries meet in their FIFA World Cup opener on June 16.

Never mind he was yet to play for Australia, let alone share a field with the midfielder that cost Manchester United around A$160 million last year. 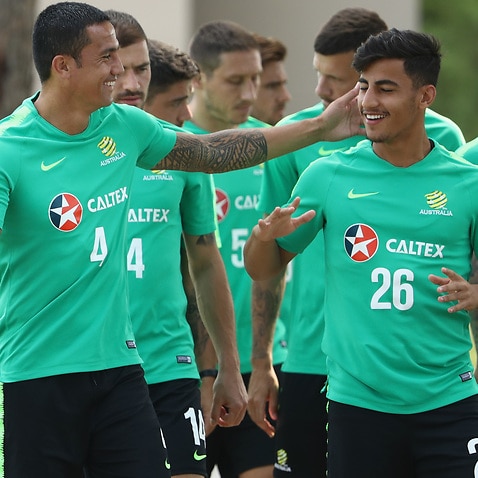 It seems that while Arzani delights in showing defenders their place, he's yet to find his in the Socceroos squad.

That's understandable when you consider Arzani will be Australia's youngest ever attendee at a FIFA World Cup.

He will also be the youngest, and only man born in 1999, at the tournament unless Poland retains their own wonder-teen, Sebastian Szymanski, in their soon-to-be-announced squad.

If there's a comparison to be made elsewhere in Australian sport, it might be with Nick Kyrgios.

Both are blessed with divine talent.

Both carry themselves with a certain swagger, a confidence or brashness that some find unpalatable.

And the very thing that frustrates is also the thing that makes them elite - the nerve to try the ridiculous, an audacity that presents itself on and off the field.

But in a team environment, that's not always appreciated.

That same environment - which Kyrgios doesn't enjoy - will spare Arzani the harsh spotlight beaming down on him every second.

And the Socceroos hope an absence of that glare will allow him to shine in Russia.

"The fact that he is with the last 23 says enough," he said.

"He is improving but he has to learn a lot. But he is a player with something extra."