Risdon was the only player from Australia's domestic competition in the Socceroos' squad for Saturday's international against Korea Republic in Brisbane.

The Western Sydney Wanderers full back didn't look out of place however and was arguably man of the match as Australia snatched a last-gasp 1-1 draw.

Adelaide United's Craig Goodwin and Sydney FC's Rhyan Grant have been added to the squad for Tuesday's clash with Lebanon in Sydney. 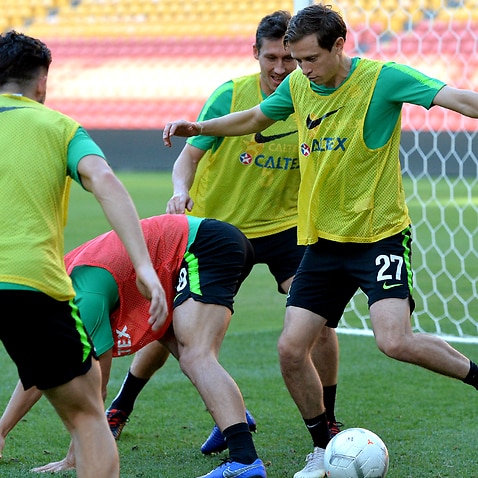 Risdon said the appointment of Arnold - who has spent the majority of his coaching career at the helm of Central Coast Mariners or Sydney FC - is a good one for locally based players.

"Obviously there's a few boys now in the squad who are from the A-League and done well this season.

"If you put your hand up and are doing well in the A-League you deserve your spot in the national team."

The 26-year-old's form for the national team has many tipping him for a move overseas sooner rather than later.

It's clearly something Risdon aspires too but the former Perth Glory defender isn't in a rush as he prepares for Australia's Asian Cup defence starting in January.

"All I can do really is just play well every game and then my chance will come to go overseas," he said.

"When that does come, if it's the right move for my career, then I'll definitely consider it."

For now Risdon is just relishing the freedom he's been granted in the new Socceroos setup.

With Arnold pushing his wingers into a more inside forward type role, Risdon basically had the freedom of the right flank against South Korea and nearly notched his first international goal when a first half strike was deflected narrowly wide.

"As a fullback he wants us to get really high and getting those runs and balls into the box," Risdon said.

"That's really enjoyable, the way I want to play. I like going forward a lot. It's a lot of work but I really enjoy it."