All but a handful of Socceroos are now ensconced in their 2018 FIFA World Cup training camp, where the pressure is on to gain a ticket to Russia.

First-choice gloveman Mat Ryan made it 21 players in Turkey when he arrived on Monday from a short break, after his Premier League exertions with Brighton & Hove Albion.

Rogic finished his season with Celtic on the weekend, while the Australian skipper Jedinak still has one match to go with Aston Villa; the all-important English Championship play-off final against Fulham on Sunday (AEST) to decide promotion to the Premier League.

In camp, the Socceroos are working to gain a deeper understanding of coach Bert van Marwijk's game plan. 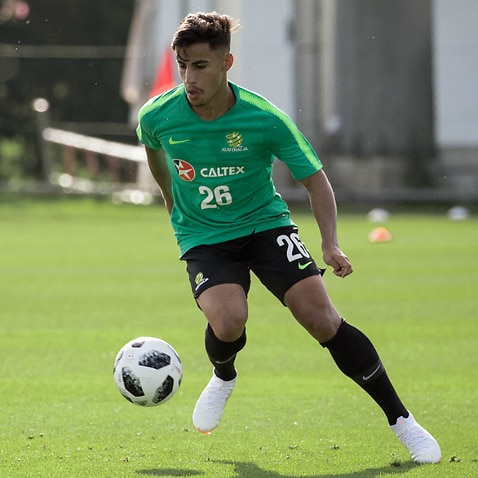 And they're competing among each other as the Dutch coach prepares to cut the squad from 26 to 23.

None of those who are yet to arrive are in serious danger of missing out.

The goalkeepers are locked in, while others have relative seniority that should give confidence.

Others don't have that luxury.

James Troisi, Nikita Rukavytsya, Daniel Arzani and Andrew Nabbout could be fighting to avoid the chop among forwards, while Josh Brillante, James Meredith and Fran Karacic are in the firing line down back.

Troisi, one of the first into the training setup in Belek said every Socceroos player understood the scenario.

"That's how football goes," he said. "Some boys who have been involved for a long time have missed out and there will be another three.

Socceroos get to work at plush Turkey camp

"But everyone respects each other which is obviously extremely important."

Troisi's biggest asset is his record of achievement at the highest level.

He scored the winner in the 2015 Asian Cup final and against Chile at the FIFA Confederations Cup last year.

He hopes success at club level with Melbourne Victory will be another plus in his column.

"Winning the league is massive ... that's what I was at Victory for; to win something.

"It's going to be a pretty tough camp but I'm looking forward to it."