The capital club's long-term pursuit of Monchi was wrapped up ahead of kick-off on Tuesday (AEST) and, although Pescara almost held out until half-time, the gulf in class between Serie A's bottom club and the closest challengers to Juventus at the summit would become clear. 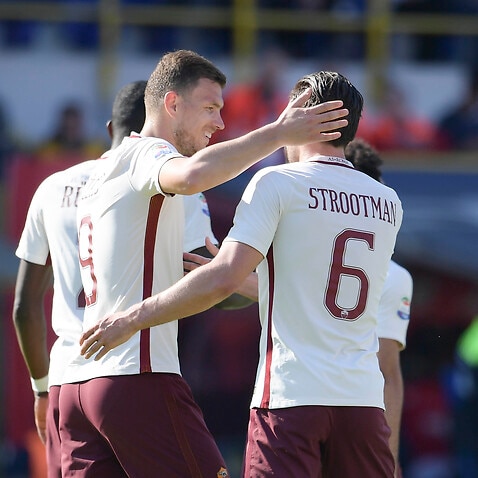 Roma win at Bologna to keep Juventus in sight

It was two in as many minutes before the break, as Radja Nainggolan marked his 250th Serie A appearance with a goal on the end of Edin Dzeko's pull back.

Salah, who earlier had a thumping volley ruled out for offside, curled impeccably into the corner to crown a glorious team move in the 48th minute – Emerson Palmieri, Nainggolan and El Shaarawy all to the fore.

The Egypt winger crowned a swift counter-attack to pile further misery on Pescara before the hour-mark, although there was also disquiet in the visitors' ranks as top scorer Dzeko reacted angrily to his 71st-minute substitution.

Ahmed Benali grabbed a late consolation to at least offer some cheer to ex-Roma boss Zdenek Zeman and his condemned side, while Luciano Spalletti's men are back to being eight points adrift of Juventus with five games to play.