EXCLUSIVE: Australia's Asian Cup-winning defender Trent Sainsbury has explained his surprise decision to quit the glamorous Eredivisie in the Netherlands for the Chinese Super League.

China is the next big thing in Asian football and Sainsbury says he is up for the challenge.

The 24-year-old has quit PEC Zwolle and signed a three-year deal with Jiangsu Suning in a $1.5 million transfer.

He will join his new teammates for pre-season training in Spain on Thursday. 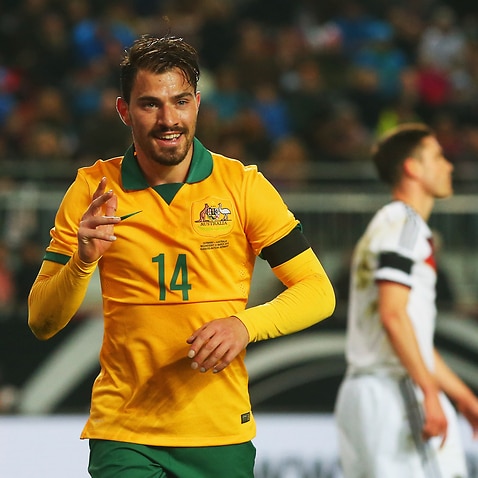 The Super League is fast becoming the mecca of top class players, thanks largely to the massive amount of money being invested in the game.

And Sainsbury, who played a key role in Australia's 2015 AFC Asian Cup triumph, sees his move to be part of 'the great haul of China' as a once-in-a-lifetime opportunity.

"Clubs are paying big money for exceptional players and to help grow the league, making the local players step up their own game. It's only going to get better year by year.

"From what I've seen in the transfer market they are targeting big name players like Gervinho of Roma, Guarin of Inter Milan, Ramirez of Chelsea and the signing of Luis Adriano fell through at the last step.

"They've tried to temp Manchester City's Yaya Toure into a deal so they are very ambitious and want to become a force in Chinese football."

Sainsbury said he thought long and hard about leaving Europe for China and all the unknowns such a move would provide.

He was leaving an established football country like the Netherlands to be immersed into a new culture.

"I don't know if going to China will be a good move for my career or not," he admitted. "The same as I don't know if staying in Europe would have benefitted me in the long run.

"Football is such an unpredictable game that you just don't know what's going to happen. It makes for very nervous and exciting times."

Sainsbury said he sought advice from several former Central Coast Mariners teammates who had spells in China and in the end opted for the big move.

"I've spoken to many people about China, mostly blokes who I played with at the Mariners such as Mile Sterjovski, Daniel McBreen, John Hutchinson and Alex Wilkinson.

"I got a very useful insight and information but I've also been to China a few times for the Champions League so I have some first-hand experience. I'm up for the challenge."

Sainsbury said the fact that Jiangsu are managed by former Chelsea and Romania defender Dan Petrescu was a major drawcard.

But he was also impressed by Jiangsu's bold ambition to be among the pace-setters in the Super League.

"Petrescu was always a positive and the club pushed hard to get me," he said.

"They agreed to my personal terms, paid the transfer fee and sent a representative across for the medical. They have helped in every step of the proceedings.

"They also have a very high attendances for every game and have a great stadium.

"There were a lot of positives for me and the list of players they are trying to sign shows Jiangsu Suning's ambition.

"It's definitely going to be a culture shock but I'm glad I won't be doing it alone .. my partner Elissa will arrive once I've settled and bring the dog across also."

Many fans, worried about the effect Sainsbury's move might have on his Socceroos form, have questioned the wisdom of opting to play in China, some even suggesting it was simply a money grab.

"To leave Europe for China a substantial offer was needed," he said.

"I've had offers in the past but those offers didn't tick all the boxes for me.

"Shandong Luneng showed interest but I felt their coach was not really interested.

"Then one morning I got a phone call about interest from Jiangsu and I made a list of pros and cons and after talking to people I respect I decided the club ticked all the boxes.

"Some people might say it's a step backwards but I don't see it that way. I'm a defender and I will be playing against some world class forwards.

"The income side of the deal will allow me to help my family and people closest to me.

"Leaving Holland wasn't easy. PEC Zwolle have been a great club to me on and off the pitch. I will miss everyone involved at the club.

"As to my position with the Socceroos I've put in a lot of hard work to get into the national team and that will continue in China.

"I'm determined to be a mainstay in the Socceroos team for many years to come."