Aussie shot-stopper Mat Ryan kept a clean sheet on a rare start for Arsenal as the Gunners ended their three-game winless run with a 2-0 victory against Newcastle United.

The Gunners had picked up just one point from their previous two Premier League games against Everton and Fulham before they suffered a 2-1 defeat to Villarreal in the first leg of their Europa League semi-final on Thursday.

However, they sealed all three points at St James' Park thanks to Mohamed Elneny's early goal and Pierre-Emerick Aubameyang's second-half finish, the fifth consecutive game in which the Gabon international has scored against the Magpies.

The result lifted Arsenal up to ninth, while Newcastle finished with 10 men after substitute Fabian Schar's rash lunge on Gabriel Martinelli. 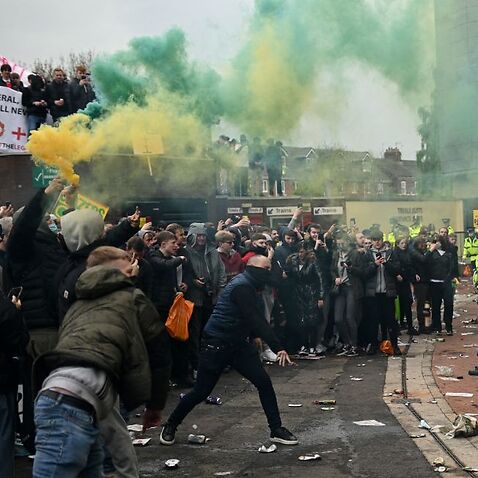 Arsenal wasted little time stamping their authority on the game, opening the scoring after just five minutes through Elneny's first Premier League goal in his 66th appearance in the competition.

Aubameyang horribly miss-kicked Hector Bellerin's right-wing cross but the ball fell fortuitously to Elneny, who struck a half-volley past Martin Dubravka from 18 yards.

Ryan – one of nine changes from the defeat to Villarreal – tipped over Allan Saint-Maximin's deflected effort soon after, while Dubravka pawed away Granit Xhaka's long-range drive at the other end.

Miguel Almiron denied Elneny a second shortly before the half-hour, clearing the Egyptian's header from a corner off the line.

Arsenal doubled their advantage in the 66th minute when Aubameyang showed superb athleticism to volley home Martinelli's left-wing cross inside the six-yard box.

Any faint hopes the hosts had of setting up a grandstand finale were dashed in the 90th minute when Schar saw red, as Bruce's men fell to just a second defeat in their past nine Premier League games.

What does it mean? Arsenal swat aside tepid hosts

Arteta's much-changed side were good value for a seventh consecutive win over Newcastle in all competitions.

They had 13 shots in the first half alone – their most in the opening 45 minutes of a Premier League game since February 2018 against Everton (13) – with Willian the only outfield player not to attempt one.

Aubameyang made sure of victory in the second half as Arteta's men stretched their unbeaten away run in the league to five games.

Aubameyang was at the heart of everything good about Arsenal's display and registered a goal and an assist in a Premier League game for the first time since July 2020 against Watford.

His goal also meant he became the first Arsenal player to score in five consecutive appearances against an opponent since Olivier Giroud versus Aston Villa (six between 2013-2016).

Schar endured an appearance to forget after being introduced with 18 minutes remaining. He won just one of his four duels and became the first Newcastle substitute to be sent off in a Premier League game since Isaac Hayden in August 2018 against Cardiff City.

Arsenal host Villarreal in the second leg of their Europa League tie on Thursday, before a Premier League clash with West Brom on Sunday. Newcastle, meanwhile, are away to Leicester City on Friday.