Jadon Sancho could make his way back to the Etihad Stadium, three years after leaving Manchester City.

Sancho is understood to be looking to leave Bundesliga side Borussia Dortmund.

But a reunion with former club City could be on the cards for the England international.

Borussia Dortmund star Jadon Sancho is open to returning to Manchester City, according to The Sun.

Sancho is tipped to leave Dortmund at the end of the coronavirus-hit 2019-20 season amid strong links to Manchester United, as well as Liverpool, Chelsea, Real Madrid and Barcelona.

However, Sancho is believed to be willing to re-join City – the club he left for Dortmund in 2017. 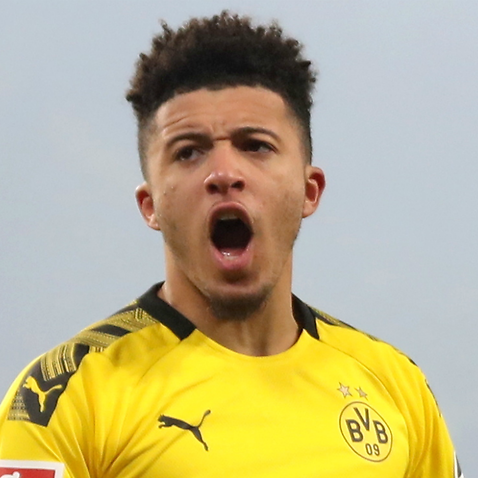 - With uncertainty over Sancho, United could turn to Jack Grealish. The Daily Star says Aston Villa captain Grealish has his heart set on moving to Old Trafford.

- Tottenham want to sign Paris Saint-Germain centre-back Thiago Silva, reports The Sun. Silva is set to leave the Ligue 1 champions on a free transfer and Jose Mourinho is keen to bring the Brazil defender to Spurs. Arsenal and Everton are also eyeing the 35-year-old.

- Corriere della Sera says Gianluigi Donnarumma is ready to extend his contract with Milan, though the new deal could include a €60 million (A$100 million) release clause. The Italy international goalkeeper has previously been linked to the likes of Juventus, Madrid, PSG and United.

- Roma star Lorenzo Pellegrini is committed to staying at the capital club despite reported interest from Juve, United and PSG, claims Sky Sport Italia and Tuttomercatoweb.

- Arsenal are close to agreeing a deal for Atletico Madrid midfielder Thomas Partey, according to Cadena COPE. Atletico are determined to renew Partey's contract but the La Liga side are resigned to losing the Ghana international – who has also been linked to United.