A few months after he tried to engineer one for himself, Lionel Messi saw how enjoyable a fresh chapter is for Cristiano Ronaldo.

It's never been his style, but perhaps Lionel Messi should have come up with a signature celebration.

What could prove to be the final encounter between the two greatest footballers of the 21st century was shot through with familiar images.

There was Cristiano Ronaldo, coolly dispatching a pair of penalties in a deserved 3-0 win for Juventus at Camp Nou.

When the ball rippled Marc-Andre ter Stegen's net, we knew what was coming. Off he tore in celebration - a jump, a twist, arms thrust out by his side. "SIIIUUUUUU!!!". 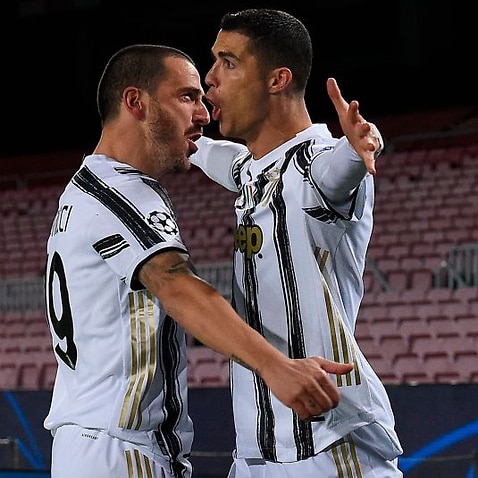 There was also Barcelona again flailing hopelessly out of their depth against elite European opposition - a repeated picture with another recognisable frame.

Any closer look at his features revealed a tired anguish and the weight of the world. He used to only look like this when he happened upon Argentina's biennial major tournament catastrophes.

Now, for the team lying ninth in LaLiga - the team of his life who he tried and failed to leave after their biggest humiliation - dejection feels like Messi's default.

Paris, Turin, Rome, Anfield, Lisbon and now this, the first time fortress Camp Nou had been breached in 38 Champions League games. Each time, the camera falls on Messi, trudging through rubble that becomes harder to rebuild after each wrecking ball hit.

Barcelona remain in this season's Champions League, so defeat on Wednesday does not carry the same meaning as those ignominious knockout stage thrashings. But all they had to do here was not mess up terribly - just don't lose by three goals and you win the group - and they couldn't manage it.

Juve scented blood early on, zipping after their opponents. The decision to award Ronaldo a soft 12th-minute penalty was perhaps propelled by reputation. His conversion was never in doubt. The result felt just as certain when Weston McKinnie crowned a move so good the entire Barcelona defence stood around to watch it.

Messi, to his credit, never stopped probing in a vain attempt to find answers beyond his colleagues. In truth, when Martin Braithwaite is the man chosen to come on at half-time to save Barcelona against Juventus, there are an awful lot of questions.

The deeper the hole Barca find themselves in nowadays, the deeper Messi tends to come for possession. "Fine, I'll do it myself."

He had 11 of the hosts' 20 shots, including all seven to test fellow great Gianluigi Buffon. Messi had more touches (125), contested more duels (19) and attempted more passes in the opposition half (82) than any of his team-mates.

By contrast, Ronaldo could lurk with intent on the margins. He touched the ball 48 times, contested three duels and had only one shot other than his penalties.

The upshot was the 35-year-old could scamper back towards his own penalty area in the 81st minute and dispossess Messi's latest forlorn assault on the massed ranks of black and white.

He loved it, just as much as he loved a triumphant slow strut around the Camp Nou pitch and back to the dugouts after his stoppage-time substitution. Those two moments combined the sort of verve and mischief that are possible when a supreme player has 12 goals in 10 games this season, apparently without a care in the world. The madness of the Barcelona-Real Madrid rivalry tends to drain such sensations in those who linger in its clutches too long. The fervour was never greater than when Messi and Ronaldo were at their peak.

Away from that tumult, Ronaldo is basking in his autumn years with a twinkle in his eye. Meanwhile, Messi meanders on joylessly, shoved along by professional pride and contractual obligation.

The pure pleasure in the play of his great rival offered a clear indication of why he wanted out. What was once unthinkable is now clear: any final triumphs in possibly the greatest career of them all are far more likely if Messi can extract himself from the Barcelona circus.